Anime Figurines – Are They Worth It?

SHUT UP AND TAKE MY MONEY

You know, I actually don’t have much of a collection of anime/video game stuff. My room isn’t nearly as impressive-looking as Yumeka’s. This basically comes down to two reasons: 1) I haven’t been collecting anime stuff for very long, and 2) I have a uni student’s budget. (Like, I buy my textbooks secondhand and I prepare my own lunch every day just to avoid spending money. I’m so hardcore, amirite?!) Mind you, whenever I have a spare cent, it does go straight towards my anime addiction, but even then, I can’t help but feel somewhat guilty about my consumer habits.

At the back of my mind, I ask myself: is this really worth it?

I mean, first of all, you can’t use figurines for anything. They just sit there and look pretty and break if you touch them the wrong way.

The other thing that rankles me (and this applies to most anime-related goods in general) is how crazy the markup is. When you’re paying $15 for a cheap plastic mug just because it has a cute anime girl’s face on it, I have to sit and seriously ponder my love for 2D girls. (Spoilers: Money > 2D girls.)

I’m not complaining about anything new here, of course. Niche markets have always worked this way. But lately, I’ve been questioning simple, basic things, like what makes you a hardcore fan?

Does buying anime figurines make you a “better” fan?

The obvious answer to that question is no, of course not. But from what I understand, it’s easy to get hooked on this stuff, especially when you approach it as a way of giving back to the industry.

Then there’s the whole collector’s aspect of it. Sites like The Anime Collectionary which attempt to catalogue every anime collectable ever appeal to the same base instinct that makes Pokemon such a popular game.

Some cynical part of me wonders if this isn’t a way of creating a social gap between the fans willing to invest their money and those who aren’t.

There are millions of different kinds of fans, though. I’d personally consider fanart, fanfics, role-playing, blogging and, yes, even fansubbing to an extent as forms of “giving back” to the industry. In fact, since they’re creative outlets, they’re productive in ways that simply collecting can never be.

So whenever I buy an anime figurine or make some other anime-related purchase, I’m careful to tell myself, “This doesn’t mean I’m more serious about my anime fandom than others.”

In all honesty, I feel more like a genuine anime fan just doing something simple like tweeting about how much I liked the latest episode of Kill la Kill. Anime fandom isn’t about how much anime you’ve watched or how much stuff you have: it’s about how much fun you have.

So why buy anime figurines?

Because they look cool. That’s it. 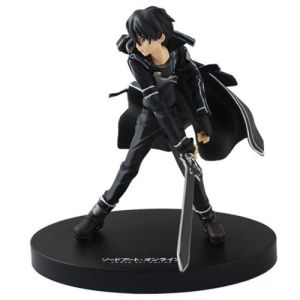 I have mixed feelings about Kirito as a character, but this figurine is really cool

This is probably why I like scrolling through sites like AmiAmi and looking at cool pictures of figurines I will probably never own. Facebook pages like this are great for window shopping as well.

My brain tells me they’re not worth it, but, but… MY HEART!

Conclusion: I don’t know what to think about anime figurines, even though I buy them. Someone tell me I’m not the only one who feels this way.