Hi, I’m that blogger who spoiled the Sakurasou light novels. The angry tears I cried over Nanami getting shafted could quench the thirst of thousands of 4channers. My rage might not be comparable to Captain Garlock’s, but I was still pretty riled up about how this show treated Best Girl Nanami.

Two years later, I decided to rewatch the Christmas arc in Sakurasou (episodes 13 and 14). I realised I was a masochist. Time did not ease my pain. Rewatching Sakurasou only made my heartbreak worse.

WHY DID I DO IT? WHY IS SORATA SUCH A DUMBASS?!

Sakurasou is one of my favourite anime. I think it came at a very timely moment in my life. I was a jealous and insecure twat who couldn’t stop obsessing over this girl I thought was better than me. In other words, I was an awful lot like Sorata.

Rewatching Sakurasou has made me realise that while I’ve changed a lot in these past two years, Sorata never did. All of the character development he receives is reset by the next arc. The Christmas arc is a particularly egregious example of this, where we’re treated to the exact same drama that we saw in episode 8. Except this time, Sorata is more of a grouch who verbally abuses Mashiro and refuses to see her as anything but a perfect artist who must always be a slave to her work.

The resolution to this arc is particularly odd. After berating Mashiro for going out of her way for him, he tells her to keep being a drawing machine because that’s the side of her he loves. Now, one could interpret this scene as him being dishonest with himself. He tells himself that he’s only in love with Mashiro’s artist side because loving her girl side would distract him from his ultimate goal. Therefore, his confession is only half-baked. But the way this scene is shot and framed, with soft romantic lighting and tinkly piano music in the background as he embraces her, sends a conflicting message. 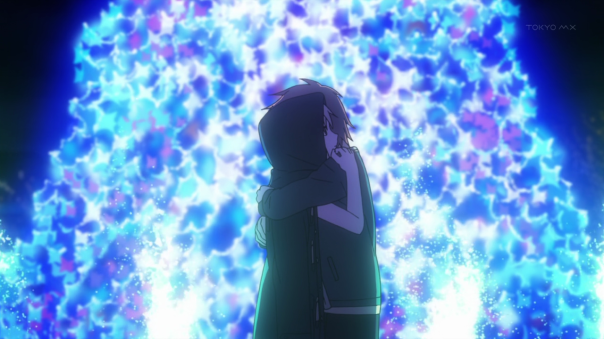 The weird thing is, I actually really enjoy watching Sorata and Mashiro interact as a boke/tsukkomi duo. (The cooking scene in episode 13 was hilarious.) But I dunno. Seeing them try to get romantic really gives me the shits since it’s so clearly an abusive relationship.

Sorata is a whole lot nicer to Nanami, predictably. Nanami made this arc a whole lot easier to swallow by being such a Best Girl. Seriously, how can you ignore such cuteness? 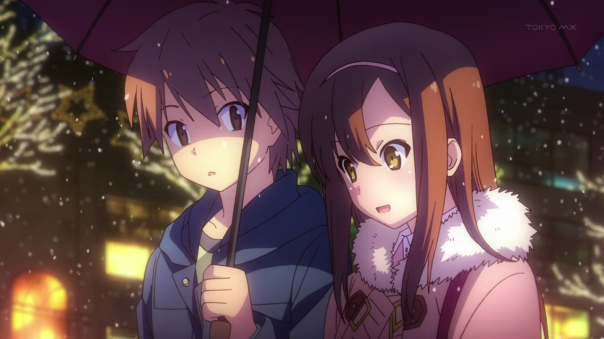 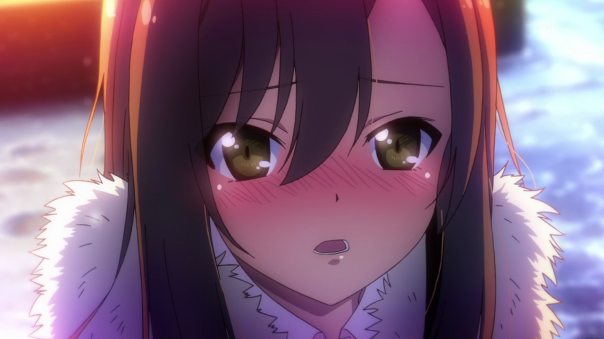 It’s not just that Nanami is a superior romantic candidate to Mashiro. Nanami is a really cute anime girl. I love her voice actress (Mari Nakatsu, who must have the cutest kansai accent ever), she looks great with her hair down, she works hard and she’s kind. I’m a big fan of the non-violent tsunderes who are merely awkward at expressing their affections. Nanami fits that archetype to a T. She’s dere almost 100% of the time.

In the end, she’s precisely one of the reasons Sakurasou’s Christmas arc is so frustrating to me, though. Seeing a girl who clearly deserves so much better than Sorata be led around by the nose is nothing short of heartbreaking. Then I inevitably get angry at Sorata once more.

Still, I can say that I did like these two episodes overall. The frustrations and the teen angst is part of the rollercoaster experience that is Sakurasou. As misguided as the messages of this show may be, I think ultimately it has its heart in the right place. There’s no doubt to me that every note of this series was sincere and that everyone involved in the project put their heart into it. The fact that it can make me feel so much is a great thing. I think I will always love Sakurasou, no matter how many years go by.

And to finish off, here’s a picture of Misaki in a skimpy Santa outfit.

Posted on December 16, 2014, in Reviews and Impressions and tagged 12 days of anime, BEST GIRL, sakurasou no pet na kanojo, sorata is a goddamn twat. Bookmark the permalink. 29 Comments.