The Characters in Fate/Zero Don’t Suck

So I recently watched this obscure anime called Fate/Zero. You might have heard of it from somewhere.

I went into the show expecting several things and found myself surprised on all counts. For one thing, the animation wasn’t actually all that great. Outside of the battle scenes, there wasn’t that much animation to speak of, and the camera work was bland as well. The scene-setting is effective mostly because of the Yuki Kaijura soundtrack and the well-drawn backgrounds, not because of the animation or cinematography. 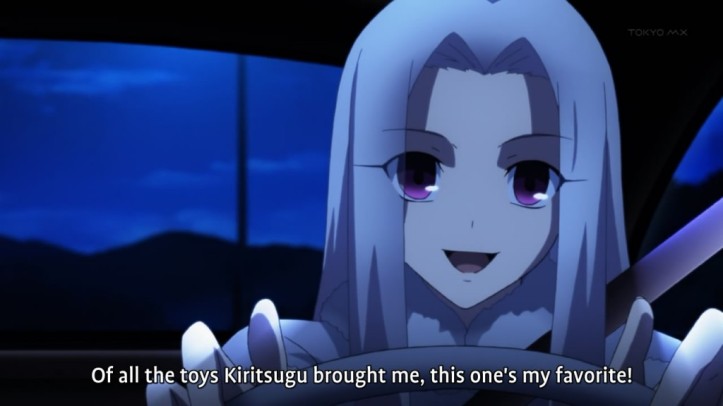 One of the examples of clever characterisation that comes to mind is Irisviel and her driving. She drives her Mercedes-Benz like a hooligan, treating it like an extravagant toy. Saber is unnerved but polite about the whole incident.

This scene tells us three things: that Irisviel has expensive tastes, that she’s fascinated by the mundane aspects of the outside world, and that Kiritsugu treats her like a precocious child.

Irisviel’s relationship with Saber is also shown very clearly here, just through visual cues. Saber assumes the role of the knight who treats Irisviel as her lady. Thus, it makes sense for her to wear a suit during her downtime in Fate/Zero, as opposed to the dress she wears in Fate Stay/Night. Her attachment to Irisviel is contrasted against her colder, more businesslike relationship with Kiritsugu. It’s a perfect setup for their eventual hostility.

A common complaint about the series is that the dialogue is too long-winded. I don’t agree with this. I think the conversations are very revealing and sharply written. The problem is that the direction cuts corners, leading to scenes like the one pictured above, where the same static image is shown while voiceovers ensue. And let’s not forget that walking-in-circles scene from episode 1. The lines themselves are interesting, but the presentation is clunky. This does muffle the impact of the dialogue, which is tasked with most of the thematic heavy lifting.

The characters are too boring and stoic, you say? No, I think they’re quite varied. Most of them might be reserved (and, yes, stoic) but that comes with their job descriptions. What I admired was how Urobuchi was able to differentiate traits between like-minded people with a common goal. Stoicism is depicted in degrees, not broad strokes.

For example, Tokiomi and Kirei both keep their cards to their chest, but as the series progresses, we see that they derive their stoicism from very different places. Tokiomi cares, first and foremost, about his duty as a mage. While Kirei at first puts his duty above all, he eventually comes to acknowledge his taste for depravity. Gilgamesh acts as the foil who brings out the contrasting tastes in the two men. He writes off Tokiomi as boring but perceives Kirei as interesting. His reasons for doing this only become clear when Kirei shows his true colours. 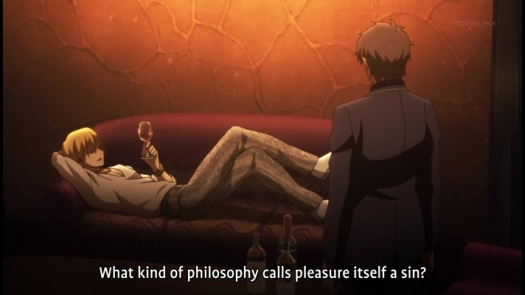 We also have Saber and Lancer, who represent chivalrous knights, stoic because of their virtue. They’re both very similar people, but there’s a very clear difference in how their masters treat them. Where Irisviel and Saber develop a friendly relationship, Lancer and Kayneth do not, and the reason for this is twofold: firstly, Lancer distances himself emotionally from his master, choosing his abstract ideals of chivalry and loyalty over pragmatism. Secondly, Kayneth reads Lancer’s erratic behaviour as a sign that he is untrustworthy, and so seeks out more Command Spells. The distrust is further compounded when Kayneth’s fiancee transparently flirts with Lancer.

Thus, Lancer is less open with his emotions than Saber; he has thoroughly retreated into himself by the time the Grail War begins. Saber gets to play the gallant knight for a while, but Lancer never does. Their ideologies may be similar, but they contrast each other quite effectively.

Ironically, where the series does fall over itself is with the main character Kiritsugu. For over half the series length, he’s a cipher. You’re given no reason to root for him, nor any insight about his ideals. His two-episode backstory is ill-placed, breaking the momentum of the plot, and doesn’t even give you a clear idea about what he is now fighting for. Only in the final episodes does his character achieve any nuance, but by then it is too little too late.

His “redemption”, though? The answer he ultimately found to his deeply flawed utilitarian belief that killing a few will save many? It’s fantastic. One line says it all.

The pacing problems also affect the impact of Kariya’s story. For over half of the second cour, he is completely out of the picture, only for his story to come to an abrupt conclusion. On paper, his dilemma is really tragic, but it just doesn’t translate to screen very well by the end. It just comes across as weirdly sadistic more than anything.

tldr; there are problems with Fate/Zero’s presentation and pacing, but the characters don’t suck and work well in the story Urobuchi is trying to tell.

(Notice how I managed to write an entire post about Fate/Zero’s characters without even mentioning the fan favourites? And I’m not talking about Caster and Ryuunosuke here, heh.)