← Rape and Child Abuse in the World of Grisaia
Let’s Talk about Religion (and a Bit of Anime)! →

It’s a fun show, filled with likable characters. None of the plot threads really came together, though, since the first season was mostly dedicated to character introductions and setup. But that doesn’t really matter when the characters are so much fun to watch. At any rate, the anime is getting a second season soon, so now’s as good a time as any to hype it up, I suppose.

The only problem was deciding what to write about: an ambitious thematic essay about Shintoism and new religions in Japan, or shipping? Which is more important to me as an intellectual? I spent over a day agonising over this soul-crushing dilemma. Then finally, it hit me… why not both?

First on the agenda – shipping.

Most of these are joke ships, of course. As usual, joke shipping is way better than serious shipping.

As I write this, I realise I don’t ship any of the main trio. I much prefer them all as friends. Yato x Hiyori is a fan favourite, but they don’t really do it for me. The age gap is a bit much – isn’t Yato, like, five hundred years old? Same thing goes for Yato x Yukine.

In fact, Yukine x Hiyori is actually the most plausible pairing, since they’re only one year apart or so. Yukine did have a crush on Hiyori in the early episodes, after all. But then he got cured of puberty at the end of episode 9, so that was the end of that.

(Perhaps the reason I don’t ship the main characters is because their interactions are much too multi-layered and complex to reduce to a question of whether they make a good couple. It’s like shipping people IRL. Other people ship IRL people, but I don’t. It just feels weird. Does anyone else get that feeling?)

Anyway, here are some random side pairings which get the Froggy Stamp of Approval, in order of shippability:

You don’t really see much of them in the anime, but it’s easy to tell that glasses dude is really loyal to Blondie. There’s this scene not long after they’re introduced where Blondie is naked while glasses dude talks to her quite normally. It seems like they have an aura of unspoken trust and honest communication which is rare for anime people, to be honest. I’m looking forward to seeing more of them in season 2.

(N.B. For some reason, I like the glasses dude from Noragami more than Yukio from Ao no Exorcist. After some deep thought, I have concluded that it must be because the Noragami dude has no moles on his face.) 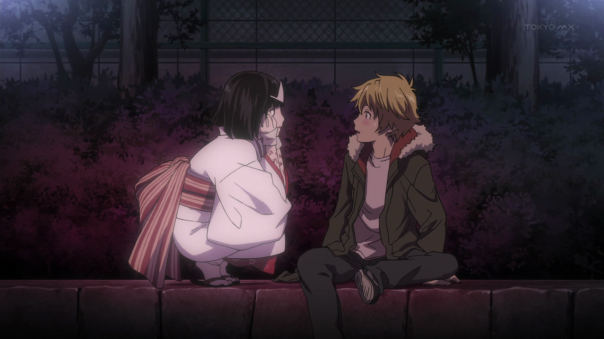 Nora wants Yukine dead because she’s yandere over Yato, she’s clearly flirting with him in this scene. She tells him he has pretty eyes and he blushes in response. Sure, she follows that up by insulting him in the most psychologically damaging way possible, but seems as legit as any shojo romance. 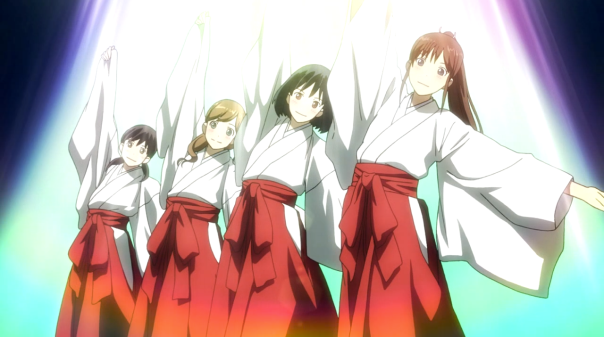 What can I say? If idiot teenage boys deserve harems, then so do old priest dudes.

I don’t really have much to say about these two, but this is a cute gif:

All in all, Noragami has some really colourful characters with interesting dynamics, all of which leads to good shipping potential. People talk a lot about the main trio (especially Yukine, who received the most character development through his arc), but the side characters are pretty great in this show, imo. The only thing that prevents Noragami from reaching the upper echelons of shonen manga at this stage is its lack of homolust, but I trust that can develop with time.

The two characters I’m keeping the closest eye on are Glasses and Blondie, because judging from the manga scans I stumbled upon, those two will have some great moments later on. I also hear that the next arc will be awesome in general. So yeah, I’m pretty damn hyped.

As for my next post, I’ll talk more about the themes and setting of Noragami and discuss how we should understand spirituality in the context of Japan’s modern political climate. As you can imagine, there won’t be much shipping talk. Alas…

← Rape and Child Abuse in the World of Grisaia
Let’s Talk about Religion (and a Bit of Anime)! →