← Ikki x Stella is not a good ship
I approve of the harem in Gundam: Iron-blooded Orphans →

Why I’m Hyped for Akagami no Shirayuki-hime Season 2 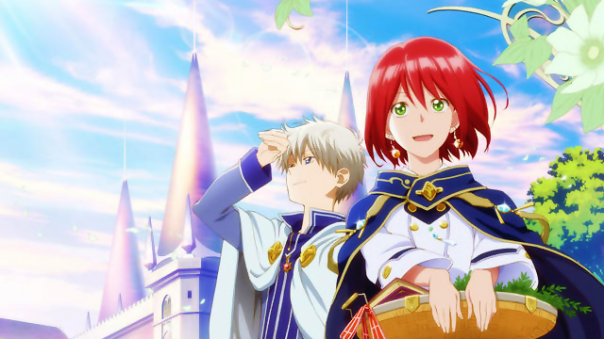 Akagami no Shirayuki-hime was a really pleasant, easy-to-watch show, but only towards the end of the season did it start to feel like it was going somewhere. Let me explain.

The narrative progression of Akagami no Shirayuki-hime is a bit all over the place. There’s a charming story about how Shirayuki chooses to become a court herbalist, but once she succeeds in that goal, the plot ambles for a while. At some point, the story ends up being more about Zen and his past than it is about the titular heroine.

Towards the end of the first season, however, Zen and Shirayuki’s struggles start to come together. Their romance (and the underlying conflict around their class differences) serves as a way for them to share each other’s burdens. Shirayuki’s journey as a court herbalist is no longer just about proving what she can do for her own sake. She now has to prove herself in front of the entire kingdom.

Season 1 feels like the calm before the storm. Season 2 is when I expect things to get real.

Otherwise, I don’t really have a lot to say about Shirayuki-hime.

Despite not being my cup of tea genre-wise, I enjoyed Shirayuki-hime. Most of my enjoyment of the series came from its wonderful aesthetics (and particularly its music). The atmosphere felt like something from a fairy tale. The characters are endearing and likable, although perhaps a little rosy and perfect to be truly interesting. It’s a fine thing to watch if you want something relaxing after a long, tiring day.

As much as I enjoyed the anime, I think I would have eventually tired of it if it remained that way forever. It did bother me when the focus shifted to Zen because I think it undermined the original point of the story: Shirayuki’s search for independence. Obviously, I don’t think you necessarily have to be single to be an autonomous individual, but we never really find out much about Shirayuki’s past or her motivations for doing things. Meanwhile, Zen gets all the meaty character development. It feels like Shirayuki is trying to have its cake and eat it too in that regard. The heroine is supposedly an independent character or whatever, but she also has this hot guy protecting her whenever she gets into the slightest spot of trouble. Oh well, at least he’s not a grade-A jerk.

By the way, the show is legitimately cute, so don’t let my minor complaints dissuade you from trying it out. It really is nice to watch an anime filled with nice people whom you would genuinely want to spend time with if you knew them irl. There’s a refreshing, down-to-earth charm to the story, even during the dramatic parts. I particularly liked the episode where Zen and Shirayuki decide to become a couple because it was handled in such a naturalistic way.

If season 2 keeps the core strengths of the series while building on the character relationships, it may turn out to be one of the finer shojo romances of recent memory. It’s the show I’m most looking forward to next season.

I suppose now is also a good time to ask: what are you looking forward to next season?

← Ikki x Stella is not a good ship
I approve of the harem in Gundam: Iron-blooded Orphans →