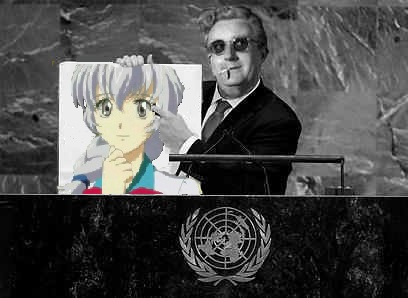 I miss the Cold War sometimes. Not that I have ever lived through it, mind you, but man did some entertaining stories come out of it. The satire of Dr. Strangelove would never have struck so close to home if it didn’t come out of the paranoid political climate of the 1960s. There’s a kind of charm to those Cold War-era relics, in that peculiar mix of optimism (“We are the good guys!”) and pessimism (“A nuclear explosion will kill us all tomorrow!”).

As time has passed, however, the villains in your average trashy thriller have ceased to be members of the diabolical, all-encompassing Soviet Union, and the heroes are no longer unambiguously good guy Americans. Your average American action flick these days is more likely to be bogged down with cynicism and snark. I’m not a good guy, so let me take delight in being a sarcastic prick! (P.S. fuck Deadpool.)

Well, perhaps it is only with the passing of time and a change of perspective that one can appreciate the apparent “naive charm” of Cold War fiction without swallowing wholesale the assumptions of the time. Full Metal Panic wasn’t written during the Cold War, but its setting clearly harks back to it, and it is only made more ridiculous by the inclusion of moe girls and giant robots. While the series does go to some lengths to include some moral ambiguity and grittiness in the narrative, the goofiness never quite goes away, even in the most serious moments.

For me, Full Metal Panic is one of those rare types of stories that succeeds on multiple levels: as a spoof, critique and a straight example of its genre.

Full Metal Panic’s lack of tonal consistency is something that comes up quite often in discussions. This is indeed one of the reasons (if not the main reason) why Full Metal Panic manages to remain fresh, no matter how cliched the actual plot developments are. One minute you’re laughing at Sousuke for being such a war nut, the next minute you’re horrified and saddened at him for exactly the same reasons. FMP’s style doesn’t work for everyone, but as far as I’m concerned, the jokes are funnier because I’m made plainly aware of the darkness behind them. But that’s not what I want to talk about today. There is another, subtler reason why Full Metal Panic is fascinating to me as a reinterpretation of the military/spy thriller genre. And that is that the story’s setting genuinely feels international in scope.

Normally with these thriller stories, a whole lot of globe traipsing is involved. Our hero (almost invariably a fair-skinned bloke from North America or a European country) will visit all sorts of exotic locales. These books frequently double up as travel literature of a sort. Readers get to become armchair explorers while the author acts as their tour guide by slipping in enough details to immerse the reader in the “atmosphere” of a foreign culture even as they shield them from the messy reality of cross-cultural interactions.

This isn’t unique to the thriller genre, and in fact this trope has been around for a very long time now. Think of books like Around the World in Eighty Days or anything by H. Rider Haggard. It’s not necessarily a bad thing, and everyone knows that reading a book about a foreign country is not the same thing as actually visiting it, but it inevitably leads to cases of Chinasplaining and Japansplaining, among other things.

At one point, the Full Metal Panic novels take aim at this very thing:

“This is what defines the Chinese. They’re cunning, brimming with vitality, and possess an amazingly prosperous mercantile spirit. They freely control their public and private faces, their yin and yang,” said Hunter.

“Try sampling some Chinese cuisine. You will readily see the vastness of this race and its culture. The ideology made up by mere Westerners a scant hundred years ago is, in truth, worthless. That separation drama, you know, that was both a crisis and an opportunity for us tradesmen. Some were ruined, but some built up their fortune. That’s always how it goes. Even if there’s a political separation, even if both sides station troops, passage between North and South was relatively simple until just the day before yesterday. In short, it’s a case of scratch my back and I’ll scratch yours.” He spoke haughtily, as if he thought of himself as a natural-born Hong Konger. Never mind that he was the only Caucasian in the room.

(As a side note, the name “Hunter” here reminds me of Samuel Huntington, the guy who came up with the contentious Clash of Civilizations theory. I wonder if this was deliberate.)

There are other ways that FMP tries to be international without aping the approach of the Euro-centric travelogues and thrillers that have clearly influenced it. All the main characters (and a majority of the minors one too) come from diverse cultural backgrounds, and many of them have also spent a considerable number of years living outside the country of their birth. This includes Kaname Chidori, the so-called “ordinary Japanese high school girl”. Instead of devoting pages to describing exotic locales, Shoji Gatoh makes his characters embody multiculturalism. I found this to be a more effective approach at conveying an international setting, even if Gatoh’s writing probably could stand to be more descriptive.

Another way that Gatoh deliberately tries to mix language and culture is through the titles of the FMP volumes. They all follow the same template, namely [Japanese verb] + [English phrase written in Katakana]. Here are some examples:

It’s because Gatoh is so committed to internationalism in every aspect of his writing that he can actually pull off a story about an international peacekeeping organisation that doesn’t feel like a front for Japanese or American nationalism. FMP keeps the fun of Cold War spy/thriller antics while excising the uncomfortable cultural baggage. Honestly, the more I think about it, the more I’m astounded at how clever the setting of FMP actually is.

Veteran anime viewers may interrupt me at this point by saying, “A Japanese high school is the least original setting out there.” Well, yes, but as you may recall, this setting is used quite cleverly in context. As in the real world, FMP’s Japan is a pacifist nation, and so much of the action doesn’t actually happen there. When dangerous battles start happening in Japan, it really feels like the shit has hit the fan. In this series, the Japanese high school doesn’t feel like an island in the middle of nowhere but simply another part of an interconnected world. 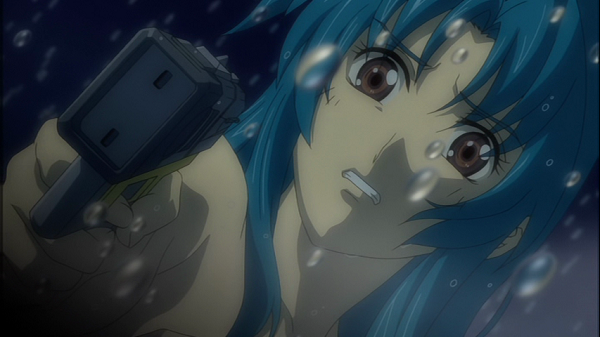 This is a roundabout way of saying that I recently read the first five volumes of the light novel and found them to be good. You should read them too. If you can’t get your hands on the English light novels, go ahead and pirate them since they’re out of print anyway. [HANDY LINK.]

Full Metal Panic has convinced me that a goofy, retrospective take on Cold War thrillers is what the world truly needs. I’d love to see more stories like this, not just from anime/light novels but from any type of media.

As I finish writing this post, I’m reminded of Guy’s essay about Concrete Revolutio, which was also about Cold War themes, so maybe I’ll watch that. One day when I feel like it…

In the meantime, I’ll amuse myself by looking at this gif, which is also, come to think of it, a goofy modern reinterpretation of a Cold War classic.