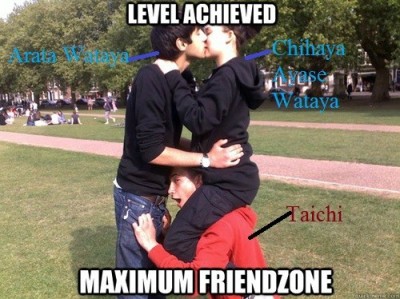 Now that the second season of Chihayafuru has ended, I figure it’s about time to come out of the woodwork and tell everyone my opinion on the shipping. Not that it should really matter since the shipping was never addressed in the second season at all, except in the first and last episodes. And yet despite this, the shipping wars have still been raging as strongly as ever in the forums. I haven’t done much more than skim what people have to say about it, though, because despite my strong emotional investment into the characters, I’m not keen on a particular pair. But shipping is a fun way of engaging with a story and I’m not out to ruin anyone’s entertainment, so let’s indulge in a long, analytic post about the central love triangle in this series.

Here is my definitive statement on the shipping debate: neither boy is better than the other.

I once heard it remarked somewhere that Arata fans dislike Taichi, while Taichi fans like both Arata and Taichi. I don’t know how true this is, but I do like both the main male protagonists – and, honestly speaking, I empathise better with Taichi because I frankly think he’s a bit of an asshole. He pines endlessly over Chihaya, calls Arata his enemy and breaks up with his girlfriend over the phone. He’s a coward, overthinks every detail and beats himself up whenever he is less than 100% perfect. Basically, he’s me, only handsome and talented.

Without Taichi, this series would not be considered a romance show. It would just be a regular sports anime, albeit about an old man’s card game. Taichi is the emotional anchor of the series, and his reactions give insight to the unspoken element of the relationships. This is a roundabout way of saying he angsts a lot. He’s sweet to Chihaya, though, and he constantly looks out for her whilst never declaring his intentions. He is the guy who, despite his desirability to every other female, will never be acknowledged romantically by the one girl he truly loves.

I’d want Taichi to get the girl, because that would give him a break. But note my phrasing: “Get the girl.” That implies that I just want him to win at something. I’m not really taking Chihaya’s own feelings – or their chemistry – into account here. It’s actually rather difficult to imagine a Taichi who isn’t silently pining away over something he’ll never have. I think that this is the sad irony of his character. It is impossible for me to imagine him having a healthy romantic relationship.

Chihaya will never remove Taichi from the Friend Zone as long as she has karuta, anyway. It is all she literally thinks about. Also, this is why the series more strongly suggests an Arata x Chihaya endgame, because Arata is the person who inspired her to go along that path in the first place. Chihaya’s admittance to herself that she loves him at the end of season 2 speaks for itself – although her lines there were actually pretty ambiguous in context. She evidently likes him as much as karuta, though, which should mean A LOT no matter how you look at it.

When it comes to karuta, Arata is like a god. He is consummate, measured, calm and – well – perfect. No wonder Chihaya idolises him and can’t take his eyes off him when he plays. No wonder Taichi compares himself negatively to him. In truth, Arata is actually a shy, dorky guy, but this is what makes him even more endearing. Arata is the ideal, and it fits the idealistic nature of the series to ship him with Chihaya. Thematically, Taichi x Chihaya would not make as much sense.

So my take is that Arata x Chihaya will probably happen in the end, but I like Taichi and I don’t want him to feel left out. I think he will eventually develop to the stage where he can be satisfied with himself as who he is. He’ll get over Chihaya one day. I think that’s for the best.

What strikes me about this trio is their sense of togetherness as youngsters. Because of the time they spent together when they were younger, I think it’s clear that Chihaya loves them both dearly. I think the amount she cares for them is equal, even if the nature of her feelings might be different. (I think she fails to recognise this within herself, though.)

There is just something that feels right about their friendship. As children, they all loved each other, although it took Taichi some time to warm up to Arata. The cracks in their friendship show after years have passed, though. Chihaya is the one who brings them all together. I doubt Taichi and Arata would ever connect with each other if Chihaya were not there in the middle.

This is why I emphatically do not want Chihaya to choose. In choosing one over the other, the dynamics of the friendship trio would tilt too severely to one end, and I think this precious something they have together would be erased. If she chose one, the other boy, feeling left out, would probably back off from the other two entirely, thinking that’s prudent. Note that this is probably why Arata was so emotionally distant for a good portion of the story after his reintroduction as a teenager – right up until Taichi told him he and Chihaya were not dating. Jealousy might form a part of it, but I think they’re all thinking too much of each other’s feelings and what is “best” for Chihaya.

Arata and Taichi are probably following an unspoken bro code where neither is allowed to make a move on Chihaya until she comes clean by her own volition. They idealise her innocence just as she idealises their old friendship. The truth is that they’ve all changed and they will never see each other the way they used to. Arata and Taichi’s feelings of love for Chihaya prevents them from connecting with each other as they once did, and neither of them want to break it to Chihaya that they possess complicated feelings that she might not even be capable of returning. They’re all complex, so much is unspoken between them, and at the same time, their words and how they relate to each other is still so simple. They’re childhood friends, after all.

This relationship they have between them moves me deeply because I think it touches on something honest and truthful about humans and how we relate to each other. When you’ve known someone as a child and then you move away and grow up, is it really possible to reconnect as you once did? In Chihaya’s bullheaded, earnest mind, she genuinely thinks so. But for everyone else, it’s more complicated than that. The nostalgia can be revisited and we can all relate deeply to our past selves and motivations, but feelings can also change. We can remember who we once were, but we can never be that person ever again.

Perhaps subconsciously, deep down, Chihaya is afraid of admitting to herself that she does love one of the boys romantically because, just like me, she doesn’t want to diminish the value of her friendships. Because that friendship she has is a powerful one indeed – it’s strong enough to last the distance and deep enough to overcome time. It’s just as well that she doesn’t want any of that to change, even if it is an inevitable part of growing up.

Karuta comes first, she says. And perhaps she’s right – poetry is the shining beacon that outlasts everything in the end. Such is the nature of art.

I am like a boatman without a rudder
Drifting from the mouth of the Yura River into the sea.
Where this love will take me, I do not know.

I’m completely open to other people’s thoughts and opinions, though. Talking about shipping tastes is fun, after all. Who would you want Chihaya to be with? Arata? Taichi? Shinobu? Kana-chan? (HELL YES to those last two!)