OreImo is a Tragic Love Story 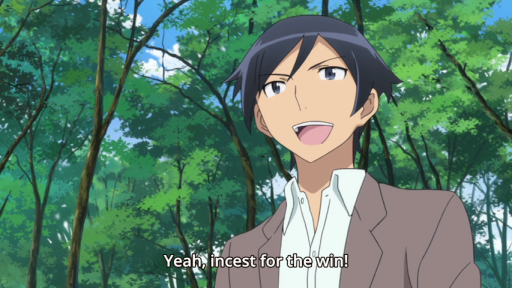 By this stage I assume you already know about the ending of OreImo. Doubtless, you have opinions. I am here to tell you that they are incorrect. My Little Sister Can’t Be This Cute! is a work of literary genius.

Where did it all go wrong? They could have said ‘no’ and stopped the farce at any point (preferably before the second season started). But on retrospect, there was no other ending it could have been. It was in the series title. It was all preordained. By the time Manami, the dutiful childhood friend, came in to stop them, it was already too late.

The story of OreImo is not an incest romantic comedy. It is a tragedy wherein all the possible happy endings are dangled in front of the audience’s eyes, only for them to be eliminated one by one because of the tragic flaws of the protagonists. As you can see, this is just like Hamlet and King Lear.

I doubt there will ever again be an anime as deep, wonderful and poignantly tragic as My Little Sister Can’t Be This Cute! This anime will go down as a classic in the history of all Japanese incest cartoons.

It truly moved my heart.