Magi is a funny series for me. For whatever reason, it is a great anime for shipping. Possibly this has something to do with the huge mixed gender cast and how everyone gets a chance to interact with each other in ways I would consider pretty endearing and heartwarming. I’m ridiculously attached to all the characters, although I think the overall plot lacks thematic focus. I’ve liked this second season a lot so far because the characters are given the chance to loosen up, although it doesn’t seem like the fun times will last forever what with the main crew splitting up.

But with the recent attention being given to the Hakuryuu x Morgiana pairing, I thought now would be a good time as any to pitch in with my thoughts.

I’m all for it, personally. Alibaba x Morgiana never really clicked with me, but that could be because I think Alibaba is a bit of a twat from the anime. My friend AquaJet is a big fan of the pairing, though, so in an effort to be fair, I did ask her what she saw in that ship. This is what she said:

They have a few of the qualities I look for in a couple. The most important aspect being that their relationship isn’t purely romantic. They have a basis of friendship and mutual care for each other.

Hmm, perhaps. I think their relationship really plays with this idea of inequality, seeing as on the surface, Morgiana is a slave and it is Alibaba, the prince, who rescues her. But instead of romancing her, Alibaba befriends her and treats her like she’s equal. On top of that, he is clumsy and dense, rather than dashing and romantic. Not to mention that physically speaking, Morgiana is stronger than him. It’s seemingly an inversion of the prince x commoner dynamic that we see in classic romantic fairytales, but it plays the core idea of it – a nice guy who sweeps you off your feet with kindness – very straight indeed. So on that level, the relationship really works.

This gif sums up their dynamic pretty nicely

I do prefer Morgiana’s relationship with Hakuryuu, though, but this could simply come down to me preferring Hakuryuu as a character. Actually, when you think about it, Hakuryuu is more of an “ideal prince” than Alibaba is seeing as he is quite the gentleman. But he’s also deeply insecure and prone to negativity. I wouldn’t say this is a “deconstruction” or whatever, but for me, at least, Hakuryuu is definitely the more interesting portrayal of the not-so-princely prince!

More so than Alibaba and Morgiana’s relationship, Hakuryuu’s advances on Morgiana feel like a traditional courtship. He treats her like a lady and is visibly affected by her presence. He’s outwardly protective her and his respect for her is evident in how deeply he seems to consider her opinions. There’s something dogged and earnest about Hakuryuu which I can’t help but get behind. 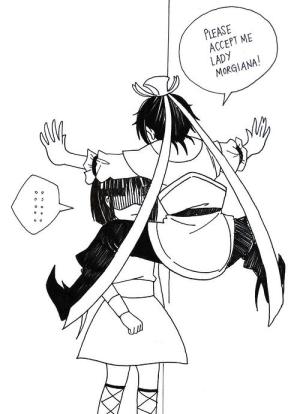 This is a long, roundabout way of saying that I think Hakuryuu would make a better boyfriend than Alibaba. I don’t deny Alibaba is an excellent friend, though.

However, Morgiana Has Shit Taste

Can’t get around that. It’s her choice, but *sigh*

I can’t help but think that Morgiana is mistaking her deep gratitude for love because Alibaba is literally the first person to extend a welcoming hand to her. I suppose her own feeling of self-loathing about her slave roots prevents her from making much of a move on anybody.

I think my big problem with AliMor is that neither of them are the type who would make a move. At least Hakuryuu has the guts to say how he feels. Probably the most Morgiana can do is embrace her femininity from time to time and say how she feels indirectly – but even then, it doesn’t really work. My interpretation actually differs from AquaJet here, interestingly enough:

They are fully honest with each other (Alibaba never comments on Mor’s “flat chest” and Mor never says anything like “B-Baka, it’s not like I like you or anything!”) and that’s why they’re refreshing in a way. Episode 18 of Magi’s first season (or chapter 81 in the manga) illustrates this point well and it probably contains the exact moments where moderate AliMor shippers became hard-core shippers willing to sink with the ship.

Both Aladdin and Ali find her dancing to be very beautiful but Ali is the one who shouts “You look really beautiful Morgiana!” and she notices his voice out of the crowd and then smiles. And her smile probably was the most beautiful thing in the anime that sold this ship.

Alibaba ruins this moment straight afterwards by complimenting all the other girls, which made me laugh but also affirmed to me that this ship is in a rut and will never go anywhere in a hurry.

… Well, there is development in the manga. Chapter 199 is probably the most epic rickrolling I’ve ever seen directed towards a ship. Being an Alibaba x Morgiana fan is worth it, just for that.

I won’t spoil it for those who haven’t read the manga, but it’s pretty good stuff, on the whole. Especially the followup chapter. Now that’s how you use shipping to make a great joke. 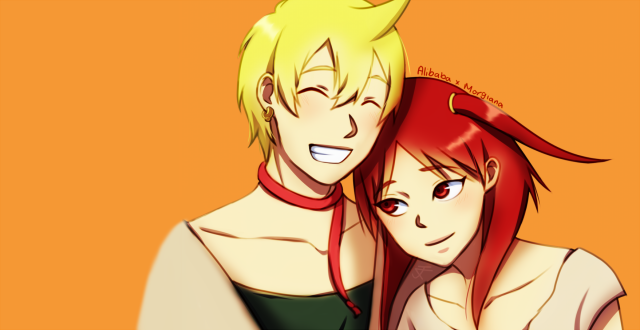 They’re both pretty good pairings. My personal biases lead me to favour Hakuryuu over Alibaba, but I think both pairings make good cases for themselves.

That all being said, my OTP is Myself x Morgiana. I guess this was a pointless discussion.

Oh well, this was still fun to write. Who do you ship in Magi?