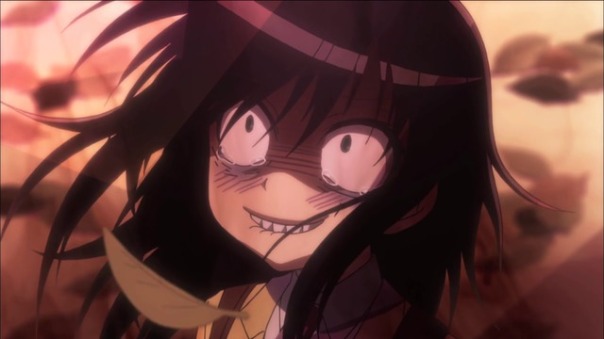 Because Froggy is away in the Philippines, twelve guest writers will be blogging about anime and/or Christmas. Today’s guest writer is Kuroki Tomoko from Watamote, who never actually responded to my emails and so I copypasted this post from her blog which no one reads or comments on.

I’ve been thinking about those shitheads who hate on Diabolik Lovers. I’ve noticed that the people who hate Diabolik Lovers are the same ones who have lovers and who live “fresh”, exciting lives.

They believe in super sappy tales of love and romance, when in fact they all just want to root each other. What hypocrites.

The good thing about Diabolik Lovers and other risque otome titles is that it flies in the face of ideals of sweet romance. Yandere guys are really great. Sometimes, they don’t even tell you that they love you – they just abuse you over and over. I like the regular otome games too, but I think dysfunctional relationships are more interesting. They feel more open and honest about what they are.

My favourite character in Diabolik Lovers is Subaru. He is my husbando. Out of all the guys in the game, he’s probably the least abusive, but that’s because he’s always struggling with himself. He has an inner violent side that comes out sometimes when you make him really mad. I always keep coming back to that. His routes are the best.

My second favourite character is Ayato. I really like his character design because he’s really cute, but he’s also really sadistic. He likes to hit me and say I have no breasts. But he has a really sad past, which explains why he acts that way. His complexity as a character really gets to me.

I also like the other guys in the game and I think the anime portrayed their charms really well. It was definitely my favourite anime this season. I’ve been begging my mum for the money to buy the Blurays, because even though they cost a lot, seeing Diabolik Lovers animated is worth it.

That’s a good thing because the rest of the fall season was complete dreck.

I hate all the anime aimed at moe pigs and ecchi perverts they make every season. They need to make more anime like Diabolik Lovers.