For the final day of anime blogging before Christmas, I thought it would be a great idea to be one of the cool kids and do a podcast. And because my bestest friends in this world are 2D, what better company to do a podcast with than anime characters?

Today’s podcast brings together the cast of Ore no Imouto ga Konna ni Kawaii Wake ga Nai and Yahari Ore no Seishun Love Come wa Machigatteiru, where they’ll be discussing the best and worst anime of 2013.

Who’s In This Podcast?

Haven’t watched OreGairu or OreImo? No fear! Here’s a quick rundown of the podcast participants:

Yukino: A beautiful but sharp-tongued girl. The most popular girl in the school, although you wouldn’t know it from her personality.

Hachiman: A cynic with devout anti-youth and anti-romance views. You might think that he and Yukino are bound to get together, but that actually hasn’t happened yet. Their youth romantic comedy is wrong as expected!

Kuroneko: An anime otaku with a strong partiality towards dark fantasy. Suffers from “chuunibyou”, a kind of adolescent syndrome which makes you believe as if you are some kind of anime or video game character.

Then of course, there’s me, Froggy, but I’m not too involved in this podcast.

Froggy: Um, aren’t you going to say anything? I mean, hello, you’re on a podcast! Random people on the Internet are listening to you!

Yukino: I can’t say I’m much in the mood for this.

Froggy: This is already going so well.

Hachiman: Let me just get this straight before there are any misunderstandings: I don’t like you or your show.

Kirino: Huuuuuuh! Are you talking to us?!

Kirino: Y-Y-You! Well, you know what! Your show sucks too, Dead Fish Eyes!

Kuroneko: It is a rather bland piece of work.

Yukino: At least our show isn’t, to put it mildly, a trainwreck.

Kirino: In what way was it a trainwreck? The ending was foreshadowed from the beginning!

Hachiman: And what a shitty ending that was.

Kuroneko: At least our show actually ended. Your show had no development in it whatsoever.

Yukino: There was plenty of character development. I accepted Hikigaya-kun’s existence and allowed him within my sight.

Hachiman: That kind of development isn’t something to be proud of!

Kuroneko: Hmmmm…! So in the end, it’s just another typical school story that’s quite overrated by otaku who like to think they’re intellectuals. Such poor taste. And this series sold over 10k copies?

Yukino: That’s because you’re an established franchise that will be on its way out now that your light novels are finished. No doubt there will be a second season for OreGairu soon enough. And it, too, will be a bestseller.

Kirino: S-Say something, you stupid cat! Back me up!

Kuroneko: …To be honest, I can’t say I was all that pleased with the OreImo ending myself.

Kirino: What?! You traitor! 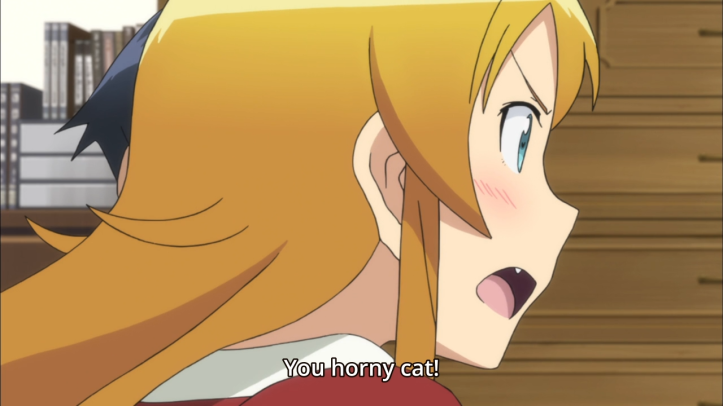 Kuroneko: I played my part in it, but I would rather things had turned out differently.

Hachiman: Looks like you’re on your own now. Heh.

Froggy: C-Calm down, you guys! Let’s have a reasonable and polite discussion about anime.

Kirino: Not happening. That bitch is going down!

Yukino: Are you referring to me? 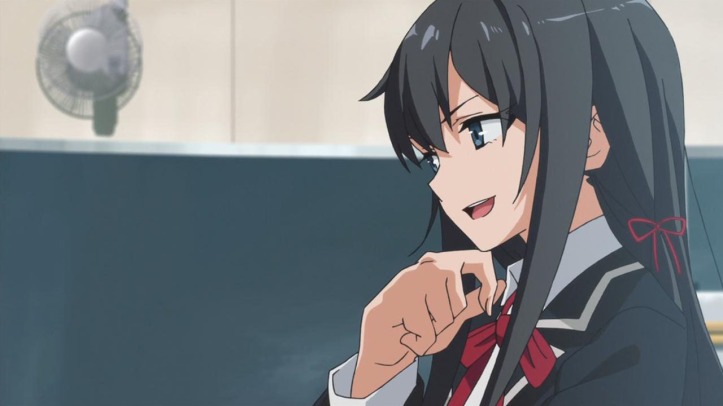 Kirino: Yes, you! And the cat is next!

Hachiman: And I thought my little sister was bad enough…

Kirino: You guys are so getting on my nerves! You’re on my side, aren’t you, Froggy-kun?

Froggy: Wow, I really regret putting you all in the same room together.

In the end, no one ended up talking about anime.

But that’s okay. I was prepared for this outcome. Before starting the podcast, I got everyone to write down their top five anime of 2013. Egoistically enough, everyone put their own show in their top 5. Whose taste do you agree with the most?

My personal thought was: WHY DO SO MANY OF THEM HAVE MONOGATARI ON THEIR LIST? WHAT DO YOU JAPANESE PEOPLE SEE IN THAT SHOW???

Otherwise, Yukino’s list appears to be the most blogger-friendly, and lol @ Aku no Hana on Hachiman’s list.

What about my top 5, you ask? You’ll be seeing that at the end of the year, so stay tuned for it.

Have a Merry Christmas!