And lo, the god of shipping said!

1) The Union Between Two Awesome Characters Is, In 90% Of Cases, A GREAT Idea

2) The Less Time A Couple Spends Together In A Show, The More Acceptable Their Love Is To The Audience”

Notice how Gamagoori x Mako ticks all the boxes.

I must profess that I was late to this bandwagon. Despite the female presence within the anime itself, Kill la Kill has a kind of “boy’s night out” atmosphere to it that makes girly things like emotions and romance seem totally out of place. That’s never stopped shippers before, though, and I have to admit I was kind of taken aback at how many people told me they were shipping Gamagoori x Mako when I brought up the subject.

In any case, I am fully converted now. It was episode 15 that did it for me. Seeing Gamagoori and Mako attempt to fight each other only to resort to a glaring contest struck me as so baffling and charming that I thought, “Wow, these two would make a good couple lol”. And that’s all it takes, guys. That’s all it takes to fall for a ship.

As usual, Tumblr has the right idea: 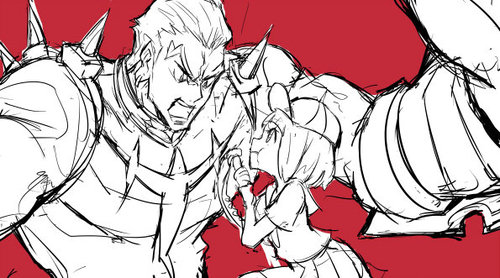 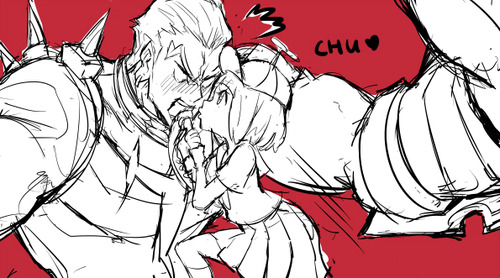 My headcanon for these two is that Gamagoori is like a dense harem protagonist in that he would never realise that he likes Mako. For some reason, he finds himself tolerating her complete lack of self-discipline and even (Satsuki forbid!) having fun in her presence. He’s amused! He even forgets about the rules temporarily! Why?! WHAT IS THIS TRAVESTY?!

Then, in my Alternate Universe fanfiction which will undoubtedly never be written, Gamagoori leaves on a soul-searching journey, wondering what has gone wrong with his moral compass. Then Mako appears and does her Mako thing and after getting mad at her, Gamagoori is like, “What drives you, Mankanshoku?” Then Mako is like, “It’s being with Ryuuko-chan!” Then Gamagoori and Mako bond over their bonds with Satsuki and Ryuuko and then Mako flat out tells Gamagoori that he’s her friend too and she’s like “YAAAAAAY MY SECOND FRIEND WHOOPEE!”

Then Gamagoori blushes and he’s like “WTF JUST HAPPENED” to himself.

Then their interactions would be much like Syaoran and Sakura’s in Card Captor Sakura, where, to recap, Syaoran is a MALE TSUNDERE and Sakura is a DENSE IDIOT. Gamagoori insists that it is nonsense to suggest that he has a thing for that Mankanshoku but… come on. Everyone can see it. Even Satsuki.

Yes, I interpreted that whole story out of this one screencap: 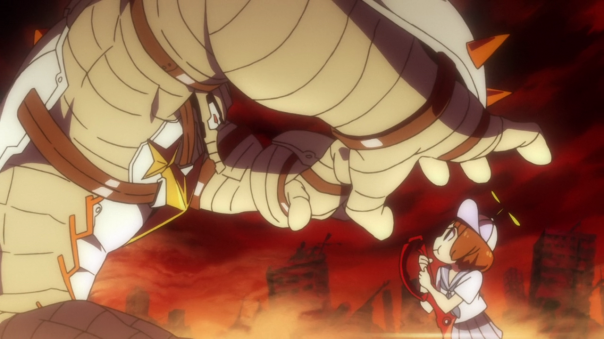 What can I say? I am a true shipper warrior.

There’s really not much else to say about these two characters that hasn’t already been said on various blogs and forums. I also find Mako to be distilled awesomeness and Gamagoori to be a Bro among bros. What I’d like to comment on is how the experience of shipping these two characters has changed the way I engage with the anime.

For a good while, I was ambivalent about Kill la Kill. On the surface level, I did like what it was doing a lot. It’s a fun, energetic and well-directed show. But it never truly clicked with me. I think that’s because, besides Ryuuko and Mako’s rather heartwarming friendship, there was never any real human resonance to the story. For all the talent that was poured into this anime, it ultimately feels hollow, a mere imitation of style for the sake of style.

Obviously, some incidental ship between two supporting characters doesn’t change my general criticisms, but it gives me a simple reason to be engaged in the human side of the story. As I get older and wiser to the tricks of romantic subplots in fiction, the urge to ship happens to me less and less. But I’ve never forgotten the feeling entirely.

At its heart, it’s a simple, earnest feeling. It might narrow my interpretation of the narrative when I admit there are times when I just don’t care about the broader themes. But I think it’s oddly fulfilling, in a way, that I watch this show because I want is to see these two characters who I care about interact with each other in a way that makes me laugh and smile. In those brief little scenes, nothing becomes more important to me than those little people on my screen.

EDIT: jstorming showed me this great fanfic, which perfectly encompasses the IraMako dynamic. The mental image of Gamagoori wearing a pink apron is just too good.

You keep telling yourself that, Gamagoori