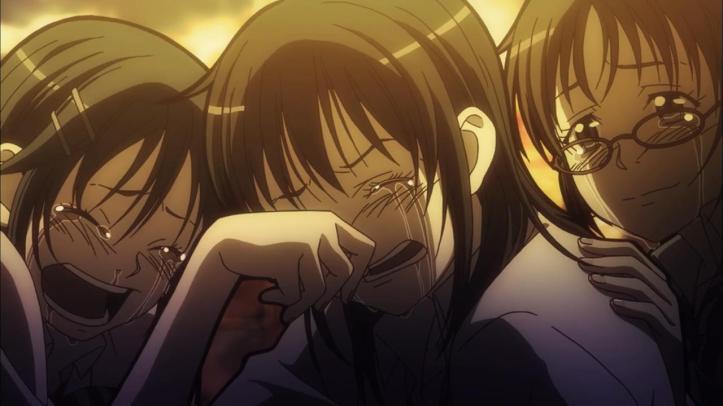 The year is 2014. Japanese cartoons featuring googly-eyed anime girls have taken over the world. What better way to spend your days in this post-apocalyptic world than to start a blog where you can freely  write about your love of anime?

In all seriousness, I really encourage anime fans to express themselves and to get involved in the community. So here’s a post advertising some up-and-coming blogs under the guise of an award.

What is the Liebster Award?

The Liebster award is intended to give some exposure to small blogs with less than 200 followers. The rules are as follows:

Anime Monographia – I think we can all agree that anyone who writes perfect scientific analysis of Yu-Gi-Oh! duels has to be a pretty awesome person.

Anime Blog Jr – Some British guy wrote this blog. I believe he is in the process of ruining my childhood through his lewd commentary on Sailor Moon, but I’m sure he’s not a bad person on the inside.

Spice and Camel – What am I doing advertising a blog that has no posts on it? Well, see, the thing is that I actually know the blogger in real life. I nominated him so that he can stop playing Hearthstone and learn how to procrastinate better.

Fantasy and Anime – This blog takes a broader scope and reviews music and visual novels along with anime. Plus, I think this blogger has great taste in just about everything!

Sleeping Geeks – This blog covers both western and eastern geek-related things and I think it does a good job capturing the  appeal of “casual” anime.

Shinsei’s Anime Blog – Shinsei’s a witty guy who does a great job balancing his snarky humour with a genuine appreciation for anime. His analysis of Super Sonico, for instance, is beautiful.

Illusions to Illusions – These bloggers have to be the worst I’ve seen at keeping a schedule, but that doesn’t detract from the creativity in the posts themselves.

Micchi’s House of Leaves – The posts consistently manage to touch upon the blogger’s personal connection to anime, which leave me with a greater sense of appreciation for the anime than I did before.

These blogs aren’t quite as new as the ones listed above, but I enjoy them and they’re on my blogroll for a reason:

Shiizumi’s Anime Blog – Shiizumi has the best taste in BL and shipping.

Under the Bridge – While my tastes and Alsozara’s very rarely align, I appreciate his aesthetic sense and his approach to critiquing anime.

SatchiiKoma – I can definitively say that BokuSatchii “won” the 12 Days of Anime Christmas last year. His posts were simultaneously hilarious and thoughtful and effectively summarised the ups and downs of 2013.

I Answer Some Questions:

I was nominated by a number of bloggers, so I decided to pick out my favourite questions asked by Artemis, Appropriant and Josh. I was also nominated for the ABC awards by TheSubtleDoctor and purpleblizzard but I found it hard to come up with 26 things about myself. Thanks for the nominations, though!

1) Describe your favourite country in the world in 3 words.

Australia: Too Many Flies.

2 Do/did you play any sports?

3) In a world without internet, how would you probably spend the majority of your free time?

Reading books, most definitely. When I want to the Philippines last month, the Internet connection there was so dodgy that I just gave up trying to go online. I managed to read every single Sherlock Holmes story ever published by Arthur Conan Doyle. Whew!

4) Think about a Mary Sue/Gary Stu crafted in your image. What would not change between you and your ideal?

I would still be just as intelligent and good-looking, I’m sure.

Philippines converted me to the Way of CandyCrush. I beat 95 levels with three stars.

(what was I doing in the Philippines I wonder…)

6) What songs in your current playlist are you not necessarily proud of?

I have a handful of K-pop songs on my playlist, which is weird because I’m interested in everything about K-pop except for the music.

7) Do you prefer chests or booty? Or are you fine with plunderin’ both?

8) If you could be an additional character in any anime, which anime would it be and why?

Sword Art Online. Even if I can never be as SUGOI as Kirito, I think it would be fun to live in an MMORPG as vibrant-looking as the ones in the anime.

9) Pick one thing you would change about your hometown and tell us why.

My hometown is, quite literally, the site of a poo farm. I wish this was not the case.

I’d like to become a better, smarter, more efficient academic. And that probably means I’ll have to spend less time at home reading (ironically enough) and more time listening and talking to other people, working out how they think and how the world works.

My Questions For Others:

2) ‘Fess up. Did you watch all the filler episodes in Naruto?

4) Between The Beatles and The Rolling Stones, which is the better old-time group?

6) “Death Note is better than Code Geass.” Agree or disagree?

7) Have you ever cried watching an anime?

8) Your opinion on Justin Bieber?

9) Judging purely from the pictures below, which of these two shows would you rather watch? (You’re not allowed to say neither!)

10) Which anime character would you SHUDDER at the thought of being married to?

11) Read this article. Is Hayao Miyazaki spot on or is he just a grumpy old fart?

Feel free to jump in and answer some of these questions even if I didn’t tag you in the post! (I think question 11 is pretty controversial…)

Finally, I should add that you don’t have to tag 11 other bloggers if you choose to accept the award. Just one or two or even zero is fine when you’re a new blogger who hasn’t read around very much. The point is letting the world know a little bit about who you are.

Starting an anime blog this year? Let me know about it!

Blogging is as much a social activity as it is a personal one, so if you do write an anime blog in English, speak up about it, because I’m always interested in hearing other people’s thoughts.

If you’re a lurker, that’s all right too, of course. I hope you found some new blogs to stalk through this post.

…Aaaaaaaand that’s that, I guess. Here’s to a productive year of blogging for 2014!