The Problem With Reading Yourself Into An Anime

I’ve been really amused by the shitstorm around Mahouka Koukou no Rettousei. I got into the show expecting the usual anime bullshit and cliches that I love and adore, and ironically ended up finding much more entertainment outside the show itself.

The shitstorm occurred for the usual reasons shitstorms happen in anime discussion. Someone (usually a critic or aniblogger) points out something that is morally questionable about an anime’s message or worldview, to which the fans immediately spring up in defence saying stuff like, “OMG U FAG WHY DO YOU READ SO MUCH INTO IT? IT’S JUST AN ANIME, HAVE FUN, CALM YOUR TITS.” Ironically, it is usually these fans who look like they are in need of having their tits calmed, seeing as they are the ones getting overly emotional in the discussion and all.

The problem stems from liking an anime so much and in such a specific way that you end up reading yourself into it. It’s like the anime becomes part of you, and if anyone criticises the anime, they criticise you, too.

I can sympathise with that, though. I mean, everyone reads themselves into fiction to a degree. When something really hits hard and connects with you, it has as much to do with your outlook and life circumstances as it does with the story itself.

And that’s great. That’s testament to the power stories have to move and inspire us. It’s just that when you take such a hyper personal view of interpreting stuff, it’s hard to detach yourself and see other points of view. Your personal interpretation is never wrong, but it doesn’t hurt to be able to relate with other people, right? Helps for pleasant social interactions.

But instead of lecturing about “THE EVILS OF RABID FANBOYING/FANGIRLING”, I’ll tell you about my observations from being in the fanfiction community for seven years, where the whole “reading yourself into an anime” thing is absolutely rampant.

When you are a derpy teenage fanfic author, you tend to go through phases. They don’t necessarily follow each other in sequence and are often combined. I’ll list them one at a time here, though.

PHASE ONE: Shipping Yourself With Anime Characters

One of the more popular types of fanfiction is creating an OC (Original Character) who conveniently is exactly like you in every way only awesome, and then shipping that character with the anime character you find most attractive at the time.

As you can imagine, this kind of writing is looked down upon, even by other derpy teenage fanfic authors. The big reason for this is that it’s a bit more difficult to engage with someone else’s self-indulgent fantasy. (But hey, it can still happen! )

Shipping yourself with an anime character is a really… kneejerk reaction to the text, I guess? When you find a fictional character romantically attractive, it closes your mind off to their character flaws (or their flaws become attractive). This makes it difficult to actually understand them on a functional, how-to-write them kind of level. As a result, the vast majority of HOT ANIME CHARACTER x OC fanfictions are shit.

Now, even if you have a more reasonable understanding of the character and that character’s relationship with other characters, finding fictional characters attractive still causes you a big problem in your interpretation. You tend to focus your entire reading of the anime around the characters. The broader themes and stylistic elements are lost – or at least relegated to lesser importance. This could explain why such a huge proportion of fanfics are about shipping, and why they don’t attempt to capture the tone or genre of the canon, even if the characters act reasonably like themselves.

This actually drove me crazy back in the day. I hated fanfics that were just about shipping. I got into fanfiction because I wanted to get more of what I liked about the series, which usually didn’t mean sappy romance. For example, the Prince of Tennis fandom pretty much consists entirely of yaoi and HOT ANIME CHARACTER x OC fics, so I made a point to only write about the tennis, because I was like the only person in the entire fandom who actually played tennis.

… Which brings me to phase two.

On the surface, trying to write stories that are “faithful” to the original seems like the smart way to do fanfiction. But, taken to its logical extent, this leads to canon worship, which is another form of reading yourself into the narrative.

When you’re a fan of a series, you feel as if you know a lot about it. You read really far into it, and you memorise all the terminology specific to that show. The problem is that when you take your geek status so seriously, you tend to feel upset when someone doesn’t seem to “get” it. Then you feel as if you’re the one who knows the canon best and all other interpretations are wrong.

This, again, leads to shitty fanfiction with narrow scopes. These stories don’t show any originality and are only ever shallow copies of the divine canon. I used to write stories like these.

Some types of narratives lend themselves more to canon worship than others. These are the stories where it seems there is an in-universe explanation for everything that happens. Stories that are “told” rather than “shown” tend to inspire canon worship. Mahouka Koukou no Rettousei is a perfect example of this.

I’d already grown out of canon worship by my later years as a fanfic author, so when I was in the Sword Art Online fandom, I was surprised by the extent of some of the canon worship I observed. Some reviewers left long, detailed comments pointing out every single tiny aspect of SAO’s world-building that I overlooked. Many of them did not seem to care very much about the themes of my narrative, only about how “faithful” it was to the original’s world-building. This fits the general perception of SAO fans; they care a lot about minor details, but don’t think as deeply about the big picture.

The biggest problem with having that kind of mindset is that, while you might have the most knowledge about a series, since you can quantify that, you can’t quantify understanding. You can’t see the story outside of “This is what the author wanted!” When I first became a blogger, it actually took me some time to adjust to readings that deliberately ignored the narrative purpose. I was still so used to looking purely inside the narrative to explain every storytelling choice.

You can easily tell an “artsy” fanfiction from a normal one, just from the summary. They usually don’t even tell you what happens in the story.

Artsy fanfiction usually attempt to be like experimental literary fiction. They don’t follow conventional storytelling rules and they attempt to depict a specific mood or emotion rather than a plot. These stories combine unrelated literary influences with a finer understanding of the anime’s themes, rather than its superficial details.

There are problems with these types of fanfiction, but this is more to do with the author’s lack of skill than the ambition. Some artsy fanfiction ape poetic prose for the sake of standing out and end up coming across as pretty nothings. Others, when you unpack them, are simply dry character studies that could have been better expressed in essay form. But in general, this type of writing tries to portray grey areas of interpretation, and they attempt to stand up as works of art in their own right. 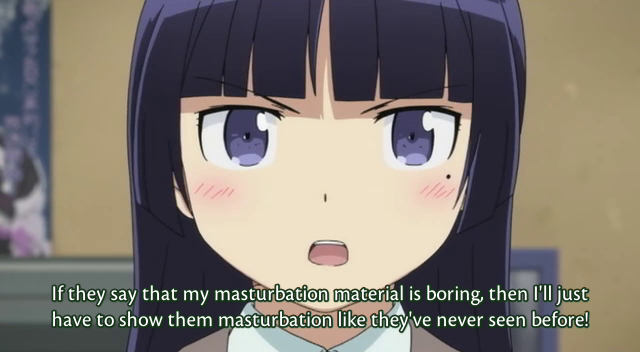 The problem with reading yourself into an anime isn’t just that you’re more likely to be a prick or self-defensive when someone insults your favourite anime. The problem is that you don’t end up being a very good writer.

After a certain point, fanfic culture really doesn’t help you if you take writing seriously. It’s seen as a form of self-projection, both from inside and outside the community. I quit publishing my fanfiction last year because as much as I believe in the potential of fanfiction as a literary form, I think I’ve gotten as much as I could from the community. Right now, my primary outlets of creative writing are blogging and translation.

Taking up more conventional criticism through blogging has helped expand my thinking a lot since those fanfiction days. I’m still seeking more meaningful readings through anime. I don’t have any answers about what’s the “best” reading for anime and for fiction in general. I’m still developing myself as a reader and thinker myself.

This post focused purely on the “writer’s” perspective on self-projection in fiction. I would have linked to examples of what I thought were good and bad fanfiction, where you can see how limited interpretations really weaken the quality of writing. But I figured that pretty much everyone on the Internet has encountered bad fanfiction and should know exactly what I’m talking about. I also tend to assume that my blog readers aren’t interested in fanfiction, despite how much the theory behind it still interests me. If you do want to ask me where all the good fanfics are, just ask away in the comments. I have a list of favourite fanfiction and favourite authors that covers most of the popular fandoms.

Well, that’s it for this post. I’d originally wanted to write more specifically about canon worship and how this applies to Mahouka, but that’s opening a huuuuuge can of worms. Maybe next time.

(P.S. This post is a perfect encapsulation of everything that is entertaining and awful about Mahouka blog posts and their comments. Not the post, the comments.)