Narrative Self-Projection and Hypocrisy: Why Suzaku is a Better Character Than Lelouch

If you pointed a gun at my head and asked me what my favourite anime of all time was, I’d probably tell you that it’s Code Geass. It’s not the series I have the most nostalgia for (that would be Card Captor Sakura). It’s not the title that I consider anime’s finest artistic triumph (that would be Neon Genesis Evangelion). It’s not even the anime that’s resonated with me as a person the most (that would be Hyouka). But I’ve engaged with Code Geass on practically every level – as a robot fan, a shipper, a literary nerd, an otaku, etc. It’s the series I’ve gotten the most out of as a fan of anime.

tldr; I could write about Code Geass all day, but today I’ll focus on my single most controversial opinion about this show: I think Suzaku is a better character than Lelouch.

Now let me write a whole essay about it.

Let’s get this out of the way first: I love Lelouch, just like I love all of the Code Geass characters. Lelouch’s charisma and his habit of actually getting things done is probably one of the main reasons why Code Geass took off, and why other series which attempted a similar style of storytelling didn’t have the same spark. Code Geass is flamboyant and pretentious and tries to do too many things at once without letting anyone in on its hand, but it’s also oddly compelling – a lot like Lelouch himself. For many viewers, whether you even like Code Geass at all probably depends on how much you like Lelouch as a character.

But what elevated Lelouch? What made him stand out so much? Obviously, it has a lot to do with having Suzaku as his foil, but I think there’s more to it than what’s simply going on in the narrative. Lelouch is an escapist character – he invites the viewer to live vicariously through him. Through Lelouch, you can pretend to change the world through morally dubious means. You can channel a kind of idealistic “I can change the world!” philosophy alongside a cynical “But the world’s a messed up place that doesn’t deserve saving!” philosophy.

Suzaku, however, is different. His character doesn’t invite the same level of gleeful self-projection. Whenever he does something that is morally wrong, the narrative is much harsher in denouncing him. 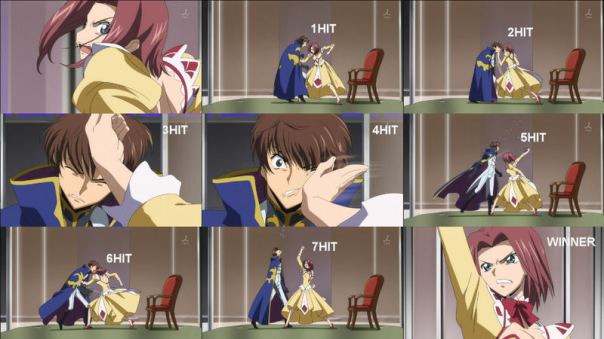 Who can forget this scene?

This portrayal merely enforces the position that nobody in Code Geass is morally right, but if you’re going to get your thrills, root for Lelouch. It’s better to be all dark and evil and aware of it than a hypocrite who can’t even see his own shortcomings.

Overall, Code Geass is chuuni as fuck. It’s a show that many anime fans first watch and enjoy in their teens and is much adored by college students in particular. This is the kind of audience that tends to bond with stories they enjoy to such a degree that they respond to the characters as if they are real people. So not only do we get a narrative that casts Suzaku in a negative light, the audience casts their own personal judgments on him too, leading to a hell of a lot of bashing. It’s hard to gauge whether this means Suzaku as a character was poorly written or whether his hypocrisy was so well-articulated that the audience can’t help but respond to him purely as a person.

My view is that Suzaku’s ideals and personality exist outside of the box the narrative and its viewers tend to put him in. Like Lelouch and other iconic fictional characters, he seems to occupy that third space between the story and the audience. However much the plot tends to make him act inconsistently (especially in R2) he seems to retain his own agency as a character. Suzaku is a clever character because there seems to be more to him than what the writers themselves were probably aware of.

(This could have something to do with the loose creative control this anime had. Without changing the core themes or the premise, the plot of Code Geass could have had a billion different endings. The huge number of “what-if?” fanfictions attest to that.)

The Lost Colors PSP game also works along the same lines as a fanfic, as you can very much see

So what makes Suzaku exist as his own person outside of just a tool to be used by the plot? And why does this make him a more interesting character (thematically) than Lelouch?

Suzaku’s character is a modern reinterpretation of an Arthurian knight. He tries to live up to noble, chivalrous ideals but fails to live up to them. I’ll quote jstorming, who has some interesting things to say about Suzaku’s role and how it relates to the themes of Code Geass:

How ironic it is for Suzaku to lower his mask exactly when he dons the mask of Zero?  The assassination of Lelouch, though clearly and intentionally public, is also an incredibly intimate moment between our knight and king. His acceptance of his fate as the new Zero and the conditions upon which Lelouch dictates to him with his dying breath are not unlike the Pentecostal Oath King Arthur commanded all of his knights to take.

So Suzaku’s character journey, broadly speaking, comes full circle and actually makes sense of a lot of his earlier hypocrisy. He realises that his attempts to be just are selfish, so he begins to try and act true to himself, but then realises that this, too, is a lie, and so finally he adopts the mask as truth by literally becoming Zero.

What makes this work, ironically, is that the narrative doesn’t attempt to make the viewer empathise with Suzaku. It only articulates his outlook enough so that you can understand where he is coming from. His guilt and his backstory about killing his father are framed more as explanations than as rationalisations for his behaviour. Nowhere is the story seriously saying, “Don’t you want to be like Suzaku?” Even his ridiculously stupid strength is used as a means of distancing him from the audience, emphasising how the viewer can never be like him. 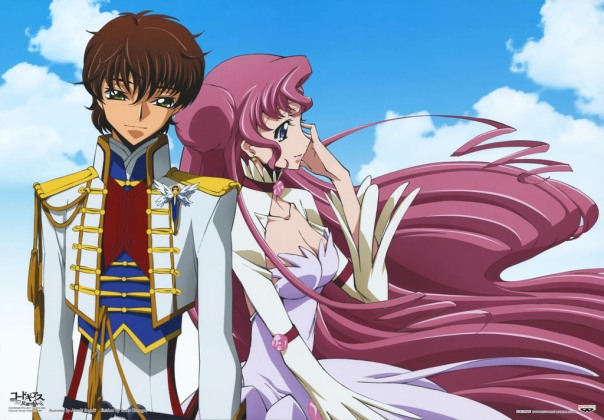 Suzaku’s characterisation becomes a lot less clear-cut than Lelouch’s, and this entire back-and-forth character development I outlined above becomes a lot more open to interpretation when it comes to its ultimate meaning.

At this point, it’s less about what the writers intended (who knows what they were smoking, after all) and how “well” they depicted Suzaku’s character and more about what kind of subjective interpretation we the viewers can make from the limited evidence that is there on the table.

My Personal Reaction to Suzaku

I have to admit that I have personally always liked Suzaku, even when he betrayed Lelouch for a pay rise.

A lot of this has to do with the fact that I really like white knight characters, and in general prefer traditional heroes over anti-heroes. I tend to think cynicism is cheap and promotes a passive outlook. In that sense, Suzaku’s naive ideals do strike a chord with me.

The darker portrayal of Suzaku as a white knight who can’t live up to his ideals isn’t a new trope to contemporary fiction – it’s been dealt with in fiction for almost as long as the concept of chivalry itself has existed. Nevertheless, there’s something very modern about Suzaku’s outlook and the way the narrative, which seems to scorn blind optimism, treats him.

I have always felt sorry for Suzaku and the way he has been received. He is not really a bad person, but the cynicism he is subjected to both inside and outside the narrative warps his character, and the result is tangible. Suzaku is so hypocritical I wouldn’t support any of his actions.

Perhaps it’s because Suzaku’s hypocrisy is more frustratingly like that of a real person that he is judged more harshly on those terms. I think this “meta” element to his character makes him inherently more interesting than Lelouch, whose philosophy is clearly crafted to be morally dubious. Lelouch is the entertainer, the audience’s guilty pleasure. Ultimately, it’s not Lelouch’s views that really gets the audience thinking about their own moral philosophy – it’s Suzaku’s hypocrisy. This is what elevates Code Geass above mere popcorn anime.

The other reasons why I like Suzaku are a bit more shallow. He looks like Syaoran from Card Captor Sakura / Tsubasa Reservoir Chronicle, who is probably my favourite anime character of all time. His spinning kick is more broken than Geass. That’s good enough reason, right?

This remains my favourite Spinzaku gif

Final Note: Is Any of This Relevant to the Current Anime Season?

This post was actually somewhat inspired by recent discussion about Mahouka Koukou no Rettousei and No Game No Life. There’s been some talk about how escapism and stories which encourage the audience to project themselves onto their characters are inherently bad for storytelling.

While I do agree that power fantasies don’t lead to very interesting literary ideas (hence why I thought Suzaku was a better character than Lelouch), I don’t think disagreeing with the worldview within a narrative is enough grounds to criticise it. And there are always times when the narrative slips out of the writer’s own control, anyway. Even Code Geass, which I think was intended to be an adolescent power fantasy along the lines of Mahouka and NGNL, ends up articulating some genuinely interesting ideas along the line, precisely because it ended up transcending the writer’s own vision.

I like to give these stories the benefit of the doubt and take them as they come, so I’m still watching Mahouka and NGNL and enjoying them both. Neither of them are as good as Code Geass, but, hey, what is?