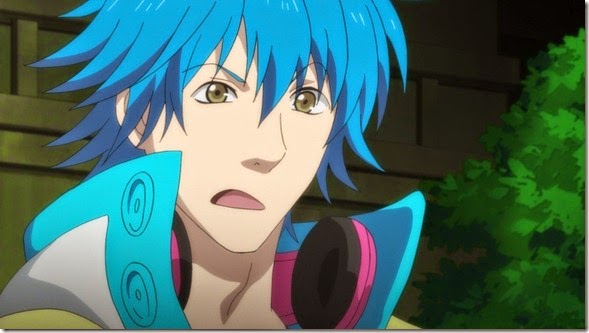 Instead of contributing to society in any shape or form, I have been spending the last couple of days playing a BL visual novel called DRAMAtical Murder. I looked into my crystal ball and foresaw that the anime (which is airing this season) would be full of QUALITY like the above image implies. So I decided to cut the middle man and just play the game instead. Here are my spoiler-free thoughts.

DMMD (as it shall henceforth be referred to in this post) is the first BL visual novel I have ever played. I had played VNs targeted at female audiences before, but none of them featured adult content. DMMD did. While I enjoyed the story, the PLOT (if you know what I mean) left me mildly traumatised.

Still, it’s a well-constructed game. I would  recommend this to pretty much anyone older than eighteen, male or female. Playing it pushed me out of my comfort zone – in a good way, for the most part. I always imagined myself as being highly tolerant of BL. Sometimes, I’ve participated myself in yaoi shipping, mostly for a good laugh. But I’d never actually seriously attempted to engage in the genre, so playing DMMD was an eye-opener in that regard.

I’ve been told DMMD is a good “gateway” VN for BL newbies. I can corroborate that. The story is almost entirely plot-driven and the hardcore BL stuff happens only towards the end when you’re already invested in the characters and story. Other than Mink’s route, the relationships depicted in DMMD felt pretty tame. The power dynamics between the protagonist and his love interests were fairly equal outside of intercourse, though of course it’s still clear that Aoba is meant to be a stand-in for the female player.

I found Aoba’s character design to be really interesting in the way it toys with and reflects feminine and masculine imagery. He’s dressed entirely in blue, which is a masculine colour, and his jacket makes his shoulders seem broader than they actually are. You don’t actually notice his long hair at first glance, since they’re cleverly obscured by his jacket and headphones. When he takes them off, you can see very clearly how slender and feminine he appears.

He’s easy for female players to identify with, I think. He maintains enough masculine assertiveness to be desirable in his own right as a man, but he’s also the submissive uke. During the sex scenes, he looks almost indistinguishable from a woman. The most interesting thing about DMMD is how it deliberately blurs the line between femininity and masculinity. Aoba came off as a very respectable hero for being open-hearted and expressive but also physically and mentally tough.

Personally speaking, I had no trouble roleplaying Aoba and making choices according to my own gut. On my first playthrough, I got Koujaku’s good end. Koujaku is the childhood friend character. I decided to trust him over the other random weirdos I met, even though he wasn’t my favourite character. Trusting Koujaku to the end was what got me the good ending, although on retrospect, many of the choices I made were naive, passive and overly trusting. Hmm… 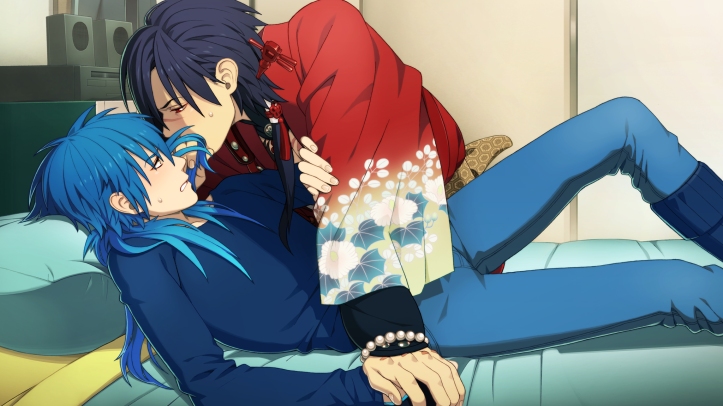 I hate to admit it, but I found the sex scenes to be so disgusting and awkward that I resorted to closing my eyes and mashing enter until they were done. (You can’t skip H scenes in this game.)

My experience gave me pause to think. Was my reaction homophobic? Was I a hypocrite for endorsing gay romance but despising the physical aspect of a homosexual relationship?

Thinking about it more, though, I came to the conclusion I was just overthinking it. I’ve never cared much for sex scenes in visual novels. And it would be ridiculous to equate a lack of fetish for gay porn as a sign of homophobia. I didn’t have a problem with the guys kissing or touching like in the images in this post, so I suppose I was turned off by how long, drawn out and gratuitously kinky the sex scenes were. Like, one guy had piercings on his penis. Wouldn’t you get an infection from being penetrated with a penis like that, to say the very least? (The other thing I was wondering as I was playing this game was what if my parents walked in on me during that scene. Not sure how I would theoretically talk my way out of that one.) 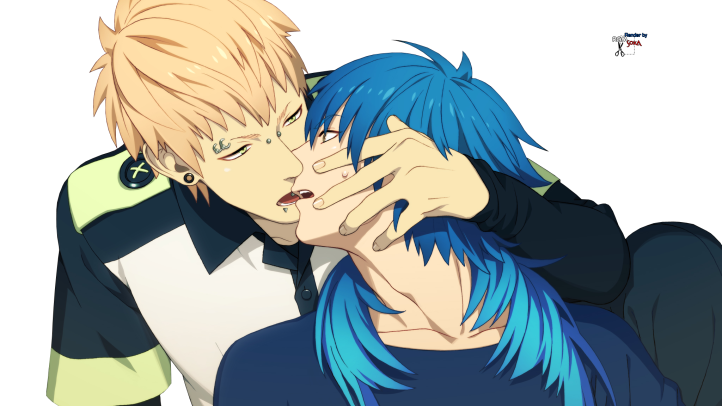 What were the best routes?

The best character was Clear. He was funny. Except for when he took off his mask, at which point he turned kind of lame.

MC-kun probably had the best chemistry with Noiz. Noiz had some weird fetishes, but he was all right I guess.

Koujaku was a boring childhood friend with an angsty past. Yawn.

Ren is a Bro with a capital B, but unfortunately I’m not into best bestiality, or twincest, or whatever the hell their romance was meant to be.

The bad ends in this game are pretty horrifying as well as kind of hilarious. MC-kun loses his legs, gets his head ripped off, and is raped by two guys, a lion and a giant cobra. I can’t make this shit up.

DRAMAtical Murder is a good game with some bizarre tropes and fetishes, but overall manages to be entertaining most of the time. I enjoyed this more than I thought I would, actually. It also gave me a few interesting things to think about with its portrayal of gender and homosexuality.

Would I play another BL game after this? Maybe. It probably depends on the amount of sexual content. I probably won’t play Re:Connect (DMMD’s sequel), since I heard it’s mostly just fanservice and sex.

If any of you readers happen to be BL game fans (or just visual novel fans in general) feel free to recommend me some games to play in my free time! I should probably finish Grisaia before the anime comes out.