The beautiful twinkling of eternity that will never fade, no matter what.

Planetarian is the first visual novel I played from start to finish in Japanese. I suppose it will always hold a special place in my heart just for that reason alone. It’s short and accessible (only about 3-5 hours long), and also one of the very few Japanese visual novels with an official English release, so I recommend at least giving it a shot if you’re interested in this branch of visual media.

While we’re talking about Planetarian, now is a good time to mention that the game is half price on Steam at the moment. The offer ends on the 22nd of June (or the 21st, depending on your timezone), so snap it up while you still can!

Now, onto the review.

I’ll admit this straight off the bat. No, I didn’t cry. I didn’t even come close, to be honest. While I do enjoy Key/Jun Maeda works (namely Clannad, Little Busters and Angel Beats!), I find the comedy much more appealing than the drama most of the time, and Planetarian is pretty much entirely a drama. The peppy heroine saves the story from being entirely maudlin, although the ending was sort of like the Hobbit movies. It went on for far, far too long.

To its credit, Planetarian maintains a consistent tone throughout its 3-5 hours of gameplay. The narrative works mostly because of its minimalism. Unlike the last visual novel I played, there are no wasted scenes in Planetarian. Although there are only two characters in the story, the setting comes to life. This is pretty impressive when you consider the lack of variety in the backgrounds and music tracks. Make no mistake – Planetarian is a dated release, but it gets by on the strength of its prose.

The story follows an unnamed man voiced by Daisuke Ono (屑屋, or ‘Junker’ in English) and a robot girl named Yumemi Hoshino (ほしのゆめみ). This android girl doesn’t dream of electric sheep, but she does dream of stars. A relic of a bygone era, Yumemi remains oblivious to the war that destroyed civilisation. Now, she exists only to show her first customer in years the wonders of the planetarium – a planetarium that has long ago fallen into disuse.

The post-apocalyptic setting is nothing you haven’t seen before, but there is something genuinely charming and endearing about Yumemi’s passion for stargazing. As a robot, Yumemi emblemises the forward-thinking optimism of the human race, but ironically the humans themselves have given up hope. Inevitably, Yumemi’s undying optimism rubs off on the Junker, and through her he discovers a renewed sense of humanity.

Yumemi might seem like an implausible character, but I don’t think she’s that unrealistic. Her personality remains very static throughout the entire story, but the Junker perceives more and more humanity in her behaviour as time goes by. It reflects the nature of human fascination with robots. Robots do not possess a human mind, but they cannot help but reflect their creators. The fact that humans can become so emotionally attached to robots honestly says more about humans than it does about the emotional capacity of the robots.

As I was reading the visual novel, I could not help but be reminded of PARO, the world’s most therapeutic robot, according to the Guinness World Records. Seriously, how could you not get attached to these kawaii mofos?

So yeah, what I liked most about Planetarian is that it reflected a sincere, earnest belief in humanity, despite the bleak scenario. It helps that it’s not a romance, because let’s be honest – that would have been weird.

Also, for what it’s worth, I think that the story peaks around the middle mark. The second half never manages to capture the magic of the planetarium scene. I know that some people found the ending very moving, but I found it too conventional and heavy-handed. That’s about all I can say without spoiling it.

Reading a Visual Novel in Japanese

Finally, I’d just like to mention a quick note about my experience reading a visual novel in Japanese.

Japanese is not my first language, so I read it much slower than English. I mentioned that Planetarian is a 3-5 hour long game, but according to Steam, it took me 9 hours to finish. I was messing around on Twitter and Skype as I had the game open so that time may not be an accurate measure, but still, I’d say I took approximately twice as long as normal to read it.

What slowed me down was the military jargon. I wouldn’t recommend this game for beginner learners. Just look at some of these moonrunes: 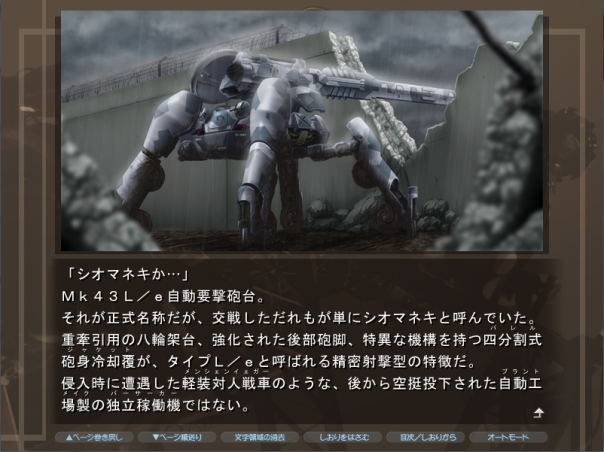 Now, it’s not as if I can’t decipher these sentences at all, but I do have to concentrate harder. Instead of reading the sentence as a whole, as I am used to doing in English, I read each word individually and then piece together the meaning of the sentence. It gets tedious after a while, especially when I’m not interested in the subject matter.

Other than those tedious passages I described, I thought Planetarian had some nice prose, especially in the more emotional parts. The dialogue, though, was a little plain. Perhaps that had something to do with the Junker not being a particularly communicative type, so the two characters never really bounced off each other. Keiko Suzuki did a wonderful job injecting real enthusiasm into Yumemi’s impeccably polite lines, though.

I can’t comment on the English translation, so for those who have read it, I would be interested in hearing your thoughts on it. Was it good/bad/indifferent? Also, how do you approach reading for pleasure in your second/third/tenth language? Feel free to share your thoughts!