You might have noticed I haven’t been posting as often lately. I could say I’ve been busy and this would be true, but the real reason is that I’ve been choosing to watch less anime. I’m more of a casual watcher these days. Could it be that I have become a riajuu???

No love life in sight, however.

Seriously, though, I’ve been pouring a lot of that time and energy I used to dedicate for fandom-related stuff into things like volunteering and activism. I’ve also been working on my honours thesis, which is coming along quite well despite the mountain of reading it involves. Overall, I am pretty happy and satisfied with my life right now.

Of course, I’d love to post more often. When I do make the time to watch anime, I still really enjoy it a lot. I just started watching Gundam Unicorn, which is pretty cool, even to someone who has never watched UC Gundam. There’s also a bunch of light novels I really want to read. (Did I mention I’m writing my thesis about light novels?) So yeah, don’t assume I’ve lost any of my passion for this fandom, even if I’ve been less active lately.

One thing that sucks about not being active is that I haven’t been able to respond to all the blogger nominations I’ve received recently. So I thought I’d round them up and respond to them all at once. Thanks to Black Ragdoll at Absolutely Anime, Lazarinth at Fantasy and Anime, leaveit2me at Popculturemecha, Neomo at Neomo and Anime and fiddletwix at The Anime Madhouse!

We’d be here all day if I answered every single question, so I thought I’d just answer two questions from each Sunshine Blog/Liebster award and write two facts for each Creative Blogger award. Here we go:

1. To what degree do you separate your blog content and personal life, and why? 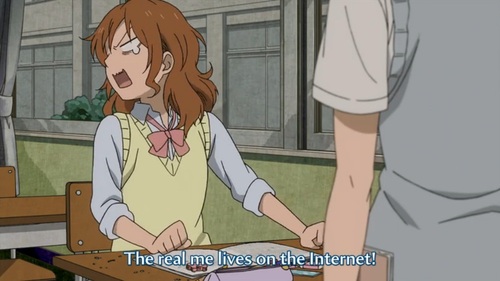 I see my blogging as an extension of real life. It’s always important to remember that there’s a human behind every keyboard. That’s why I try to conduct myself online the same way I would offline. In other words, I’m a confirmed dork irl.

At the same time, I don’t tend to talk much about my blog irl. Some of my friends read it, but I know they’re not really interested in all the nerdy analysis I do.

So I guess you could say the blog is an important outlet for me, but still separate from my day-to-day life.

2. If you could be anyone else, who would you be (real or fake)?

3. If you could be Liam Neeson in any movie he has been in, which movie would it be?

This is an obscure one, but After Life. He plays this owner of a funeral home who gets to talk to people after they’ve died. It’s a bit freaky and would no doubt get tiring after a while, but it’s one of Neeson’s more fascinating roles.

4. Are you frustrated how online streamers don’t release the material you want?

You bet! In Australia, we seem to get the short end of the stick, since not all Crunchyroll shows are viewable over here. Luckily, we do have AnimeLab, which is a pretty good streaming service for people in Australia and New Zealand. The translation quality is a bit shit, but you could say that about every anime streaming service, tbh.

That said, I’d probably be more frustrated about this situation if I kept up with the latest shows.

On another note, did you know that Australia leads the world at pirating Game of Thrones? Just what you’d expect from a nation of convicts.

5. Do you think the mainstream West will ever understand Japanese media?

Honestly, I doubt even anime fans understand Japanese media. I sure don’t. I mean, what does it mean to “understand” media? Do you need a degree in media studies or what? And then there’s the problematic conception of the West versus Japan…

Putting that all aside, if you’re asking whether anime will ever be mainstream in my country, my confident answer would be no. There was an interesting column on Answerman about this in the context of North America, but the situation is pretty similar for Australia. To put it simply, the TV broadcasting system is ridiculously difficult for foreign markets to penetrate directly. It’s also a slowly dying beast. These days broadcasters know that the only safe investments are football and the news. Anything marginally different gets relegated to our cable network, Foxtel, which is stupidly expensive, especially compared to cable in America.

Fortunately, the rise of digital distribution and online streaming renders the issue of “mainstream” relatively moot. And that’s a good thing! The breakdown of traditional media flows lets all sorts of alternative outlets flourish.

On the other hand, you still have to go out of your way if you want to learn about Japan and other Asian countries. The West’s cultural hegemony will have to end before that can change on a large scale. It’s naive to expect that simply knowing about anime will make you more culturally aware, after all.

6. Why do you write about anime and what’s your goal when it comes to this?

The obvious answer is “because it’s fun!” but I think I do have deeper goals as well.

Namely, cross-cultural communication. I’d like to promote a deeper, more critical awareness of anime and its place in the world. As a translator, I feel that I have an obligation to help build this awareness. I’m not just talking about spreading translations or spouting facts about Japan. I firmly believe that everyone should become more sensitive about matters of cultural difference. It’s too easy to misunderstand in all sorts of contexts, so I try to listen to other perspectives sincerely and I encourage others to do the same.

At the same time, I should emphasise that I do not know everything. One of the main reasons I write on a blog and communicate with my readers is so that I can learn lots of new things as well. A big thanks to everyone who contributes.

But yeah, anime is fun! You can’t find a better reason than that.

And now for four facts about me. Or more like four facts I learned while working on my thesis.

Now, nominations. The rules say you have to nominate 10-20 blogs, but I’ll just do seven for now:

Mage in a Barrel

Basically, just do what I did: answer the six questions I answered and list four facts about yourself (or about anything). Alternatively, you can check out the blogs that gave me the awards and try out their format. I’m not really fussed. Just try to have fun.

For anyone else reading this, you can answer the questions in the comments or on your own blog. Feel free to hop in!