What if Natsume Sōseki were an anime character?

Natsume Sōseki is going to be resurrected as an android university professor. This is an actual thing that will happen.

Funnily enough, this might not actually be the quirkiest interpretation of Japan’s most admired author. Not only have his major works been adapted into anime and manga, Sōseki has appeared as a manga character before. In Koisuru Bungou, the Meiji author is portrayed as a romantic shojo lead character, who also happens to be a sparkling bishonen. Apparently, this manga was part of a “Kyun-kyun Kuru!” educational series created in order to get kids interested in literature. Okay.

Then there’s the 4koma manga Sensei to Boku – Natsume Souseki wo Kakomu Hitobito, in which Sōseki is portrayed as a neurotic university professor and a bit of a tsundere. This might be an accurate description of him, given that Sōseki smiles in exactly none of his photos in real life. 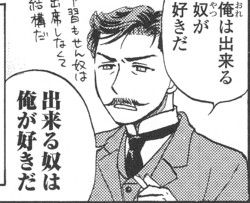 Natsume Sōseki is too moe.

All these things got me thinking: what if Natsume Sōseki were a tsundere android professor in an anime? I feel that he could easily fit into the worlds of Joker Game or Bungou Stray Dogs, two anime airing this season. Let’s run them down.

Sōseki’s inclusion in Joker Game would be anachronistic because he died in 1916, but as an android, time doesn’t wear him down. Besides, twenty years isn’t so far ahead in the future that Sōseki would be completely lost if he were suddenly thrown into this time period. It’s an interesting thought exercise as well. How would Sōseki respond to imperial Japan anyway?

As it turns out, it’s a question of much heated debate among scholars. You see, when Sōseki was at the peak of his writing powers, Japan was already starting to head in an imperialistic direction. In 1905, Japan defeated Russia in the Russo-Japanese war, which marked the first time an Asian nation defeated a European power. Japan had also started building colonial outposts in the Asian continent. Yet because Sōseki never spoke up directly against state expansion, some scholars have described him as complicit in Japanese colonialism. (See James Fujii’s “Writing out Asia” in Formations of Colonial Modernity in East Asia, for example.)

On the the other hand, Sōseki’s writing doesn’t paint a particularly optimistic vision of the future. This is especially the case in his later works, which are preoccupied with themes of loneliness and alienation. Obviously, Kokoro was the most notable example of this. If we choose not to conflate “modernity” with “Westernisation” but instead see it as part of the backdrop of Japan’s nation-building and colonial expansion, then Sōseki’s uneasiness with the modern condition indicates that he was rather pessimistic about Japan’s ultimate fate, even if he could not have predicted what eventually came to pass.*

In that sense, it sort of reminds me of the general vibe of Joker Game. Despite being more overt in its condemnation of the attitudes of those who supported imperialism (it is a postwar work, after all), it would probably be accurate to say that the anime is more preoccupied with creating a moody atmosphere. There are some cool spy antics going on, but the viewer is deliberately held at arm’s length. You don’t get to see inside the main characters’ heads, and nobody is portrayed as particularly likable either.

Android Sōseki would probably mope around in a dimly-lit room and spout some self-important shit about how he’s a relic of the past that has been trapped in a postmodern form. He’s a perfect fit for this show.

If he were a Bungou Stray Dogs character, on the other hand, Sōseki’s pomposity and self-seriousness would definitely be played for laughs. This would also fit extremely well with the mood of the show, given that the other characters are exaggerated caricatures of famous literary authors. Sōseki would be the perpetually grumpy character with a secret soft spot for cats. When pressed about his affinity for cats, Sōseki would sniff and say, “wagahai wa neko de aru.” Literally: “I am a cat.” 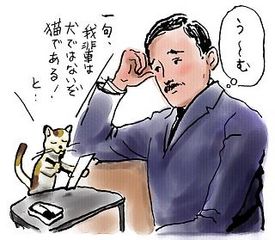 Android Sōseki would probably mope around in an onsen and spout some self-important shit about how he’s a relic of the past that has been trapped in a postmodern form.

Whether his characterisation as an intellectual is serious or ironic, it totally fits – and maybe that’s partly why Sōseki has become an immortalised figure over the years. Sōseki might have a reputation for being morbid, but he could be quite a funny fellow when he wanted to be. Throughout his more light-hearted works, Sōseki would often satiricise the snooty and high-handed intellectual (see: I am a Cat and Botchan), and he even poked fun at himself in Travels in Manchuria and Korea. So it would make sense for him to embody that sort of character in an anime or manga, two art forms that typically lend themselves towards irreverence.

Maybe Sōseki’s themes are so flexible because he was always the kind of person who never fit in anywhere. His uneasiness with the world around makes him easily transferable to other settings, but also impossible to pin into one place or time. His work is definitely the product of a distinct time and place, but at the same time he’s universal. It’s no surprise that even a thoroughly modern light novel like Oregairu would incorporate some of Kokoro’s themes of loneliness and isolation. Sōseki can be endlessly reinterpreted and reimagined and the core of his writings wouldn’t be lost.

So yeah, it’s nice for the rest of us that Sōseki’s works are being widely read and appreciated today in some form. Now what would the real Natsume Sōseki think of this? 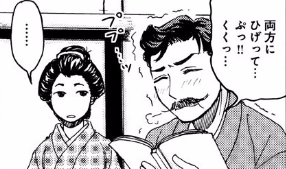 Somehow, I doubt it, though.

* Don’t let him off the hook entirely, though. In 1909, Sōseki started publishing a column in the Asahi Shimbun called Travels in Manchuria and Korea, which is littered with casually racist observations about the locals. Still, he spent most of his time complaining about stomach aches and didn’t even get to Korea, which kinda gives the impression that he wasn’t too interested in imparting the wonders of the Japanese empire to the masses.