Reflections on 2016: For Japan, the Postwar Extends Forever

“Postwar extends forever.” This is one of the most memorable lines to come out of Shin Godzilla, Hideaki Anno’s ambitious reboot of the Godzilla franchise. In context, it’s a powerful moment. Our protagonist Yaguchi looks around at the world disrupted by Godzilla’s existence and voices something that he has always felt – that the problems which Godzilla laid bare were always there, and that this is the burden Japan must bear into the future.

12 Days of Anime
#3 – For Japan, the Postwar Extends Forever

Shin Godzilla is the most politically charged Godzilla film to date, which is remarkable considering that the franchise has always had strong symbolic importance in postwar Japan. In the original 1954 film, Godzilla is an allegory of nuclear power gone awry. By trampling over Japan’s largely ineffectual Self-Defense Force, the monster affirms just how powerless Japan has become under the American Occupation. New Godzilla films tend to pop up whenever Japan deals with heightened anxiety about its own security as a nation. For this reason, Godzilla’s enduring popularity is an emblem of Japan’s never-ending postwar.

Unlike the direct sequels to the original Godzilla, Shin Godzilla shows us Godzilla’s very first appearance, only in modern Japan. No one knows what to make of the beast, and the modern Japanese government initially can’t even decide whether to kill Godzilla or protect it as rare wildlife. The film’s sharp criticisms of Japanese bureaucracy feel particularly relevant in a country still reeling from the government’s tragic mismanagement of the Fukushima crisis. Shin Godzilla was a loud and angry film, but it ended up being the highest-earning live action film produced domestically in Japan since 2013 for that very reason.

I’m glad I got to see Shin Godzilla. It reminded me a lot of Sho Aikawa’s script work on Concrete Revolutio in that it demanded a great deal of cultural literacy from the viewer to piece together the significance of what’s happening onscreen. At times like these, my Japanese degree comes in handy, but I’m sure a lot of extra layers went over my head anyway.

But it wasn’t just my textbook knowledge of Japanese history and politics that helped me appreciate Shin Godzilla and Concrete Revolutio. In 2016, I began to engage with the issues of postwar Japan on a more emotional level. I don’t mean to say that I became particularly educated on the subjects, although I did do some reading here and there. Rather, I spent more time grappling with a certain question in my mind.

What would it be like to grow up in a country that lost the war?

A country that lost the war cannot be allowed to forget that it lost. It must continue to deal with the consequences of war, for it cannot claim victor’s justice.

This question was what led me to investigate the Japanese reactions to the Gate anime, which ended up being one of my most popular posts this year. Despite being as pro-military as your average American blockbuster film, the Gate anime attracted huge controversy on both sides of the Pacific. I personally think that Gate is a pretty mediocre anime, but it did stand out to me how Japan was being judged by different standards from the rest of the world. While I’m no fan of nationalism of any stripe, there’s simply no indication that Japan will return to its imperial past, and yet its memory is constantly invoked.

In 2016, I also watched Space Battleship Yamato 2199. I never blogged about it at the time, but actually it ended up becoming one of my favourite anime of all time, precisely because of how it dealt with these issues of war and memory.

The basic premise of Space Battleship Yamato 2199 is one of historical revisionism. The Yamato was the name of one of the heaviest and most majestic battleships ever built. It was supposed to be the saviour of the Imperial Japanese Army, but it was sunk almost immediately in the Battle of Okinawa. In the romantic sci-fi opera world of Space Battleship Yamato 2199, however, not only does the battleship return from a seemingly hopeless journey into space, it also succeeds in saving the world many times over.

On the surface, this seems like nothing but historical whitewashing. But the crew of Space Battleship Yamato deals with war guilt and personal loss throughout the tale. The anime presents a romanticised picture of what the Yamato should have been, instead of what it was. It’s this deep pathos behind the fiction that gives the romantic tale its emotional weight.

By the time the real-life Yamato set sail on its final voyage, the war was already lost. There was no way that the Yamato could turn it around. She might have been an impressive ship in her own right, but she was on the losing side of the design war. Large warships were falling out of vogue by World War II, replaced by the lighter and speedier aircraft carriers. The Yamato never stood a chance against repeated aerial bombings.

The real-life Yamato was also a symbol of hope, but now it is a grave in the ocean.

That’s why Captain Okita swears that he will see Earth again, even though he is deathly ill. He moves forward for the sake of the new generation, so that there will be no more hopeless sacrifices. 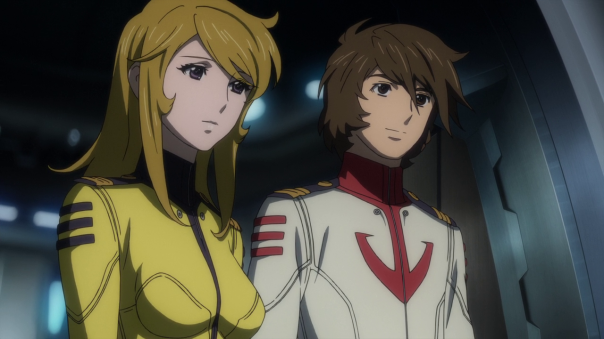 There’s a scene at the very end of episode 7 where Kodai and Mori, the two young officers, look back towards Earth for the last time before their ship loses contact with the planet. Instead of falling into fear, the two of them are full of hope. “We will come back,” Kodai insists. “We will come back!”

These words are in the lyrics of the anime’s famous opening theme as well.

When I listened to these words, I thought of an entire lost generation, sleeping at the bottom of the sea… and I began to cry.