How a Realist Hero Rebuilt the Kingdom, Possibly at the Cost of His Soul 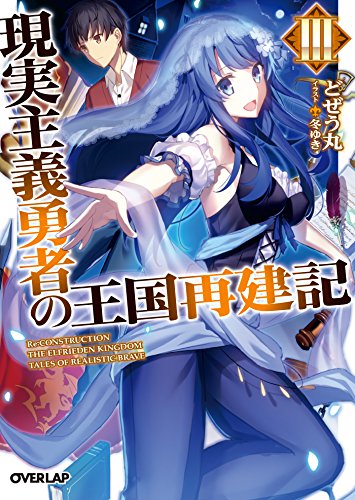 WARNING: This blog post contains spoilers up to How a Realist Hero Rebuilt the Kingdom volume 3.

In the afterword of volume 3, Dojyomaru writes, “I believe both the good and bad points of this story come out especially strongly in this volume.” And I can absolutely see what he means by that. In this volume, the contradiction between Souma’s desire to govern as a liberal and the inherently undemocratic nature of the monarchy system is very pronounced, which ends up making Souma look like an absolute hypocrite. Only Souma is aware of the contradiction, because he is the only character in this story who grew up with democracy.

The volume begins with Souma occupying the neighbouring nation of Amidonia and showing the people what freedom of artistic expression looks like in his own country of Elfrieden in the form of a musical program. When an enemy commander tries to take this opportunity to stir up nationalistic pride and resentment against the occupying country by singing Amidonia’s national anthem, Souma essentially tells her, “You’re free to sing whatever you like.” This is Souma at his most benign and liberal, seemingly unfazed by dissident points of view.

…which is why his actions towards the end of the volume are particularly jarring. He gathers a group of nobles whom he suspects are conspiring against him but haven’t openly acted or spoken against him, and orders their execution. He admits that he does this without actually gathering all the evidence against them first, nor does he offer them a chance for a fair trial. (As a matter of fact, he has them killed at someone ELSE’S trial.)

As for his reasoning and justification behind his actions, he cites Macchiaveli’s The Prince. He argues that it’s better to remove opportunists who will cause trouble later, as they are a problem to be nipped in the bud.

What Souma does can be described as nothing less than a political purge. He agonises over his decision and is aware that he is only coming up with rationalisations after the fact, but his self-awareness doesn’t lessen the weight of his crimes.

Nobody else in the room is actually that bothered by what he did, however. Under this system of monarchy, high treason is a capital offense. The people of this world have been urging Souma to take a hard-line stance against treason since volume 2. That is why, even though he knows that some of the people who opposed him in the war like Carmine and Carla are good people, he cannot allow himself to forgive them publicly. The responsibilities of a king clash with his own ideals as a classical liberal (the best term I can use to sum up Souma’s political views in a nutshell), and despite his inner reservations Souma is compelled to adjust his conduct to the values of the world around him.

This is a fascinating dynamic, and it’s one of the things that I appreciate about Realist Hero. Souma isn’t just one-sidedly pushing his own values onto the country via reformations, which was mainly what he was doing in volume 1. Through the gradual course of the story, his own values are being transformed too. By the end of volume 3, he has taken his third wife, and I’m certain that the old Souma from Earth would have been extremely befuddled if he found out about what was in his future. 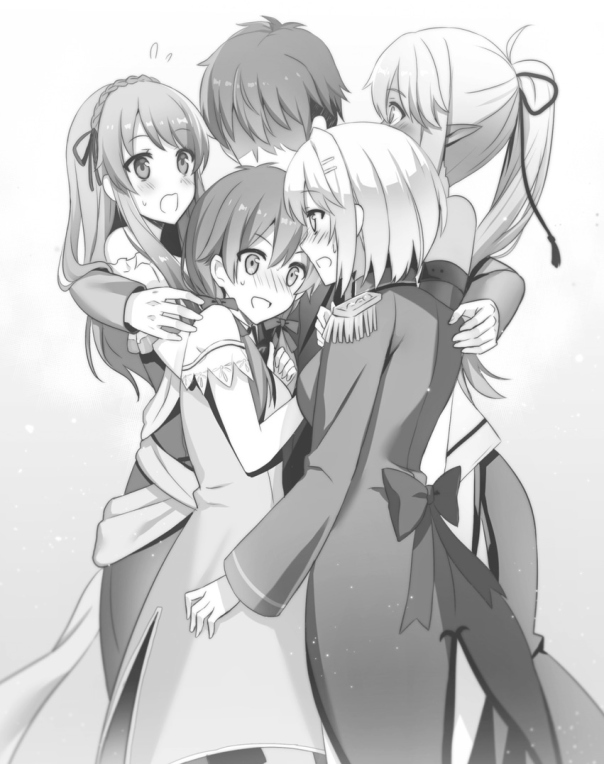 This image is from a bit later in the series, but I think you get the idea

Through my point of view, as someone brought up in a liberal democracy, I think that what Souma did through killing his political opponents was reprehensible. He tells Carla, “Kill me if I become a tyrant,” but I think that the action he had just performed would already deem him a tyrant according to modern democratic principles. But I also don’t think that Souma’s governance should necessarily be judged through the point of view of a democrat. He is king ruling under absolute monarchy, which means that the position he occupies in his world’s society was already that of a tyrant to begin with. Him creating liberal institutions and encouraging freedom of artistic expression doesn’t change the fundamental power dynamics one bit. Monarchy is inherently nepotistic, after all, and as far as citizens are concerned, the system only offers extremely limited options for social mobility. Yet within this system, there is a difference between “good” and “bad” kings, and the former is what Souma is striving for.

Souma comes across to me as someone who is attached to the side benefits of Japanese-style democracy. He likes the free market, the social security blankets, cosmopolitanism, the food and art cultures that have been given the freedom to thrive. But he is not so attached to the system of governance attached to democracy. In that sense, he is like a lot of isekai protagonists who want to recreate the comforts of their home country in another world. And I think it makes sense for them not to be so attached to the idea of parliamentary democracy given that this system was foisted onto Japan from above during the post-war era. This sort of story reflects the disconnect many young people feel when it comes to Japan’s parliamentary system, which is oblique even at the best of times.

I’m also reminded of the discussions that the Japanese people had during the Meiji era in regards to what political system was ideal for the country. Some voices argued for a Britain-style parliament, but ultimately Japan decided to adopt a mix of constitutional and absolute monarchy. This took the form of the Meiji Constitution, wherein the Emperor was considered the head of state and wielded significant political power, although in practice the Cabinet governed the country for the most part. Of course, this system eventually spiraled into imperialism and tragedy, and it’s very much a fringe opinion today to argue that Japan should re-adopt the Meiji Constitution. But the point is that Japan’s current system of democracy was not the first system to be adopted when the country began to democratise.

The history of Japanese democracy is complicated, in other words, and it’s not as if the Japanese people have been preached to for generations about the virtues of one particular style of democracy over all other systems. It’s why I find Japanese perspectives on world history and politics interesting and thought-provoking. Particularly in Realist Hero’s case, the series references Chinese and Japanese history just as often as Western examples, which puts things into clearer perspective. I can sympathise with the hero’s struggle to maintain democratic ideals under an alternate system of governance because I’m reminded that I shouldn’t take the system in my own country for granted.

At any rate, I don’t think that Souma will ever be able to win against his inner demons, not for as long as he maintains the position of a king. As I said before, it’s foolish to even pretend that equality and individual freedom can flourish within the long-term system of absolute monarchy, even if Souma himself is thought of as a benevolent king. The only people who will ever hold Souma accountable for his sins are his enemies. That’s why the volume ends with him telling the enslaved Carla to kill him if it ever comes down to it. He knows that Liscia and his loyal vassals will follow him into hell.

It’s a frankly awful and precarious position to be in. But, as Souma resigns himself, somebody has to be the king and take responsibility for the country. Short of abolishing absolute monarchy and tearing apart the very fabric of his country, all Souma can do is embrace the contradictions and rule as a liberal. He knows that he will never win, but the moment he convinces himself that he has won will be the moment that his downfall is certain. I’m looking forward to seeing the rest of his journey unfold.

I originally posted these thoughts on Pastebin, and got an interesting response on Curious Cat that went like this: “Perhaps the writer is critical of Meiji and Taisho-era democracy because historically this system was hijacked by the military, ultimately leading to the atrocities of World War II. Perhaps the appeal of an absolute monarch is that he’s able to firmly put the foot down against things like that.”

This brings to mind how the topic of “democracy vs autocracy” was explored in The Legend of the Galactic Heroes. All the flaws of democracy are laid bare; in fact, the authoritarian Empire came about because the people willingly voted a tyrant in. The people of the Free Planets Alliance posture about how morally righteous they are compared to the Empire, but internal squabbles and politics prevent any clear-headed decisions from being made. You don’t even need to be Japanese to look at that portrayal and think, “Big mood.” 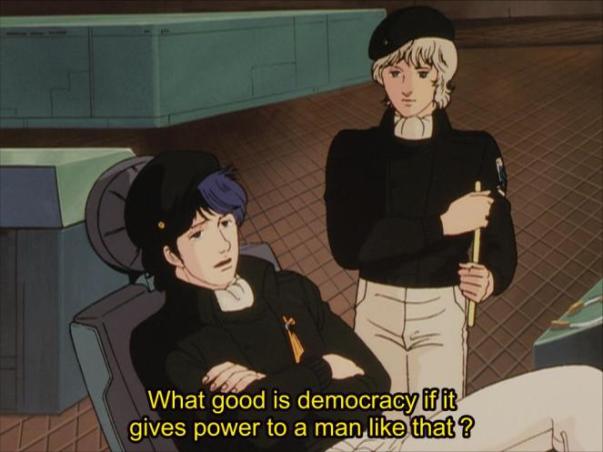 In my opinion, Souma probably feels this to a degree as well. I think it frightens him. He knows that being able to act quickly and decisively got him out of a pinch, but he’s well aware of how power like his could get abused. How a Realist Hero Rebuilt the Kingdom gets you to think: “How would I react if I suddenly had the power to make the world a better place?” Can you really be certain that you won’t lose your humanity along the way?