← How a Realist Hero Rebuilt the Kingdom, Possibly at the Cost of His Soul
Why I Banned Kink-shaming On This Blog → 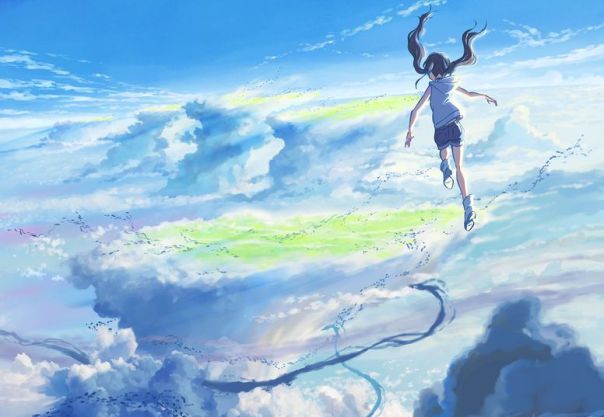 (Spoilers for Weathering With You and Makoto Shinkai’s other works in this post.)

Weathering With You is set in a Japan where the rain doesn’t stop, and only a young girl’s prayers can clear the skies. In the interviews around the release of the film, director Makoto Shinkai talked about its themes in relation to the real-life phenomenon of climate change. For example in an interview with Fujinkōron (summarised in English on Anime News Network), Shinkai said:

People say that humans are destroying nature for the sake of their own conveniences, and I agree with that. And yet I’m the kind of person who doesn’t hesitate to turn on the air conditioning in my room when it’s hot. Climate change is a large-scale phenomenon with an unimaginable scope, but there’s not much a person can do about it on an individual level. Even so, my actions as a single person have a definite effect on the environment. It may feel like something that’s out of your realm of responsibility, but it absolutely isn’t. I made the film while thinking about how to deal with that problem through the framework of entertainment.

And to The Japan Times, Shinkai said, “Humans think on a scale of 100 years or so, but the world works on a much larger scale … [The idea that humans can’t control the weather] is one way to look at things but, at the same time, that’s not quite right either, as humans have definitely changed the weather. I don’t come to a clear conclusion on this but the issue definitely lies at the heart of the film.”

According to Shinkai, Weathering With You tackles the issue of social responsibility. How much do a single human’s actions matter in the scheme of things, and are we obligated to save the world from something much larger than ourselves? At first glance, this seems like a natural fit for a story about climate change.

But I think that Weathering With You is a worse film if you read it as a climate change analogy.

I’m going to spoil the ending of the film in the next sentence, so this is your last chance to back out if you haven’t seen it yet. Hina has the power to stop permanent climate change if she sacrifices her own life. She is ready to do so, but Hodaka pulls her out of it at the last minute, and a timeskip reveals that Tokyo has flooded some years later. Humans have adapted to the new normal by the end, and Hodaka is assured that abnormal weather has always been a part of the world’s order. But when he sees Hina again, he’s convinced that the two of them did change the world.

If read as a climate change analogy, Weathering With You is very literal, as its portrayal of a city being flooded is exactly what will happen to a number of cities in the near future if proper measures are not taken. If a film chooses to be that literal in its analogy, then the bar for suspension of disbelief also changes, and I would naturally expect the core dilemma in the film to accurately depict the conflicts that face humans when it comes to dealing with climate change.

In broad strokes, the idea that people have to make a choice between their personal lives and the greater good is represented in the film. Hodaka doesn’t want Hina to sacrifice herself, so he makes the choice to save her at the possible expense of the planet. However, as far as climate change goes, the choice is not so stark. There is no expectation on us to kill ourselves in order to do our part for the planet. Setting up a conflict around self-sacrifice is great for upping the stakes in a narrative, but doesn’t make much sense if the climate change analogy is literal.

There’s also the issue of portraying the abnormal weather as a natural part of the world’s order, which could be interpreted as a climate denialist stance. Shinkai has made it clear that he believes that human activities have caused climate change, but in the film itself, there is no mention of this fact. I believe that it’s taken as a given that the audience would know about human-induced climate change, but this weakens the analogy presented because it can’t stand up on its own. Without outside context, film’s central dilemma seems to be more “Should humans intervene on the planet’s behalf?” rather than “Should humans take responsibility for the changes they wrought?” You might even misinterpret Shinkai’s own stance on climate change.

It’s my interpretation that Shinkai included this seemingly climate change denalist part because he wanted to portray a long view’s perspective on the changes that happen in the world. It’s a way of helping us humans come to terms with change so that it doesn’t seem totally apocalyptic. This is similar to the meteor strike portrayed in your name., which was revealed to be a cyclical occurrence from many years ago. I think that Weathering With You is more interesting when read as a story about how we should come to terms with the climate change that has already happened rather than as a story about whether or not we are obligated to mitigate the harms. Unfortunately, that theme only comes up at the very end and is sorely underdeveloped as a result.

I prefer to think of Weathering With You‘s central conflict as a commentary on Shinkai’s previous work and on the theme of social responsibility in general (rather than specifically in regards to climate change). In Voices of a Distant Star and The Place Promised in Our Early Days, the couple sacrifices their relationship for the sake of the greater good. That gave those stories their bittersweet endings. Weathering With You is also bittersweet, but the couple made the opposite choice instead. There’s no definitive answer given regarding which choice is better, but there’s a definite sense that Shinkai’s characters are compelled to make choices about the direction of their lives.

This is especially powerful in Weathering With You because its characters have limited social mobility and lack agency as minors. And in the end, they made a choice for themselves and changed the world. Nobody else made the choice on their behalves.

It’s also interesting how the weather changes map its characters’ moods. Hodaka starts the film in a state of fugue, which is mirrored by the abnormal rain, and Hina comes in to bring sunshine to his life. When their lives are at their most turbulent, a storm rages, but when Hina disappears, the sky feels too bright and there’s an eerie absence of rain. And in the epilogue, the sky is cloudy and the city has flooded, but there’s a calmness about it now.

I think that Weathering With You is a great film that touches on a lot of fascinating themes while being very fun and endearing. I just hope that its story is not reduced to a climate change analogy, because it is honestly way more interesting if you do not regard it as one. I am not denying that climate change is a prominent part of the film, but overall it resonates more as a personal story about being a helpless young person in a chaotic world rather than as a story about humanity’s responsibility in dealing with climate change. What are your thoughts on Weathering With You and its weather analogy?

Posted on September 22, 2019, in Anime Analysis and tagged makoto shinkai, tenki no ko, weathering with you, your name. Bookmark the permalink. 19 Comments.

← How a Realist Hero Rebuilt the Kingdom, Possibly at the Cost of His Soul
Why I Banned Kink-shaming On This Blog →