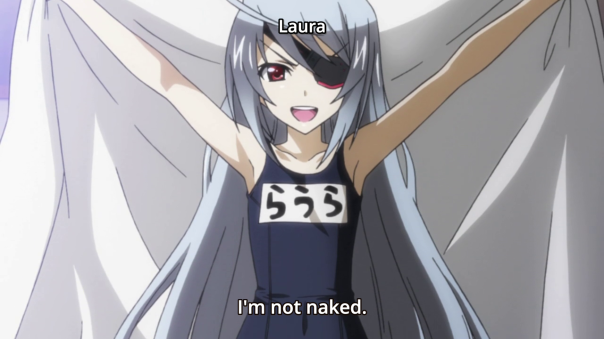 Boo! Hiss! Get off the stage!

You know, I’m going to go against the grain of the aniblogging community and say that I like anime feeling like anime. Originality’s a nice thing and all, but I happen to like that feeling of familiarity that comes with a show being an exercise in anime tropes. The truth is that while this might feel generic to an anime fan, this is stuff you would rarely in any other medium and it’s what gives anime its exotic flavour to me.

Obviously, I’m talking about Infinite Stratos, but the other shows I’ve decided to cover in this post do fall into this as well. I’m not going to keep covering Kyoukai no Kanata and Coppelion beyond this – frankly, it gets difficult to find new things to say about one formulaic anime, let alone three of them, no matter how much of a fan I am of the formula.

Mind you, I’m happy to see that Infinite Stratos won my little poll of mine for the top show to blog. Still, since there were some readers who went out of their way to ask me to write opinions on some other shows, you’ll be seeing some impressions posts like this over the week.

Here were the results, in case you were curious.

Now onto my half-assed impressions which are already too late since I overslept this morning.

So… Kyoukai no Kanata. Despite the ostensible shift into DARK FANTASY territory, it plays out like your average urban fantasy light novel adaptation. In fact, it bears an eerie resemblance to one of Rikka’s fantasies in Chuunibyou Demo Koi ga Shitai! I suppose that show was target practice for this one, as was Hyouka because there is apparently a literature club in this one too.

As you can imagine, discussing Kyoukai no Kanata on its own terms is difficult, since there’s always the temptation to analyse Kyoto Animation shows purely in light of the studio’s previous track record. But really, the overriding feeling that shows through this episode is the straight-faced ‘chuunibyou’ vibe from this. The story really is something that would appeal to middle schoolers. Like most well-executed urban fantasies, there’s a feeling of whimsy to the action, as if it really could play out in your own backyard. It’s grounded, despite the seeming lack of exposition.

So while the first episode doesn’t achieve an individual voice, it’s never anything less than competent. I feel as if others have been harsh denouncing KnK, but it’s to be expected. If you were expecting the studio to break new ground with this, you’d be sorely disappointed. As for me, I’m too neutral to flame this show on my twitter/blog, but you could also say I’m too apathetic. I wonder which is worse.

What classy dialogue this show has.

Infinite Stratos is an anime that makes me feel very happy on the inside. The novelist Graham Greene once wrote that happiness is a loss of individuality; it is only in our misery that we feel intellectually distinct from others. In the case of watching anime, that’s very true. I feel like a mindless zombie when I watch IS, but damn if it doesn’t feel good to watch.

I actually have really deep reasons for liking Infinite Stratos. I’m not even trolling. It’s deeply rooted in my personal values and experiences.

Let me tell you a story about my sex life, since mine is more interesting than Ichika’s. I’m celibate. This isn’t out of lack of opportunity – it’s a deliberate lifestyle choice. “But aren’t you always saying perverted things on this blog, Froggy?” you might say. That’s because you don’t know me out of my anime habits. Take anime out of the context and I am a grade A prude. No sex before marriage, family is first, always vote right wing, blah blah blah.

Fortunately for me and for others, having principles to guide my own actions doesn’t mean I think sex is EVIL. So watching ecchi anime (I’m not into the full-on H stuff) is a healthy outlet for me. It’s also nice that this kind of stuff does portray sexuality but it doesn’t portray sex; the characters are fundamentally innocent and pure. It matches my own mindset.

There’s also that story of me knowing someone very much like Ichika in real life. He was a bit of a tool but I got to know him pretty well, since I was  his childhood friend.

Oh, damn, I never realised how anime my life is! No wonder I eat this shit up.

(I never ended up actually talking about what happened in this Infinite Stratos episode, did I? Well, whatever, have some pouting Laura.)

So yeah, Charlotte and Laura engaged in some lesbian foreplay. It was a pretty good episode. 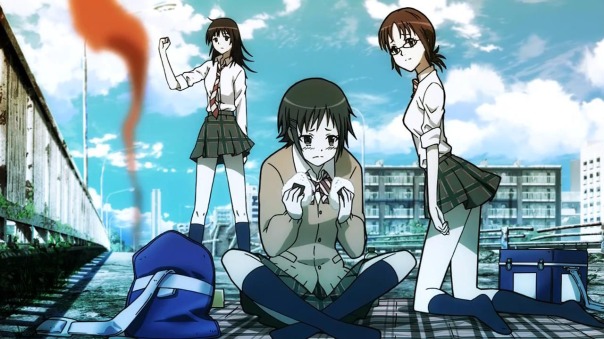 Oh, yeah, this show also existed, didn’t it? A post-apocalyptic story about schoolgirls and there’s not even any panty shots. Eh, not much to say about this. It was a pretty stupid, to be honest.

Now, I’m not saying I don’t accept the premise of schoolgirls in a post-apocalyptic setting. In fact, I do think the schoolgirls are there to give off this vibe of disconnect between what an ideal Tokyo is like and what it actually is and it makes for an interesting artistic statement, at least in theory. But the execution here was dodgy. Stylistic aspects, like the thick outlines of the characters and everything about the character voiced by Kanazawa Hana, broke the bleak atmosphere rather than helped sustain it. While the artwork was meticulous, the direction was unfocused, and what we got was a rather meandering episode that had no overall point it was trying to establish. I can see it’s got some ideas, like the girls being “dolls”, but without solid characterisations, their philosophising comes off as being shoehorned into the narrative.

Overall, there was nothing overtly “bad” about this anime. But the details just didn’t add up to the overall picture. I am interested in seeing how this plays out, though, at least in the short term. There’s plenty more anime yet to come out this season, so we’ll see how the rest of the season measures up.

I had fun with these three samples – I look forward to seeing more. From the looks of the schedule, my next First Impressions post will be out in the wee hours of Tuesday next week. I’ll probably crank out an editorial before then. ‘Till next time, I guess.