Getting into Light Novels for Girls

Some of you may be surprised that there’s such a thing as light novels for girls, but yes, they do exist. In fact, they’re a dime a dozen in the Japanese market. Just look how many “shojo” light novels are on Bookwalker – and that’s not even scratching the surface.

At the same time, it is true that Japanese light novels these days are fairly skewed towards male readers. It is said that the ratio of male-to-female light novel readers is 9:1 for male-oriented light novel labels. These include the very popular labels which you may have heard of, such as Dengeki Bunko and Fantasia Bunko. The 9:1 male-to-female ratio lies in contrast to the average ratio of 3:7 across the Japanese fiction market.

(I don’t know how precisely accurate these ratios are, but for reference, one of the editors at GA Bunko says that women in their twenties make up 15% of shonen manga readership. He doesn’t specify how many women outside that age group read shonen manga, though.)

Light novels for girls don’t usually top the sales charts, but the ones that do are usually tie-ins for popular anime. For example, the Haikyuu! and Kuroko no Basuke novels managed to crack the top ten bestsellers for 2014. Yes, neither of them are “shojo” light novels, but you can bet your life that most of the readers were female. Other popular light novels aimed predominantly at female readers are The Twelve Kingdoms, Ghost Hunt and Saiunkoku Monogatari.

It’s a pity that there are not many English translations of these light novels for girls. A few of them are really quite interesting, especially if you’re sick of the “stuck in a game world” shtick, which can happen to the best of us. So I’d like to dedicate this post to some of the more off-beat light novel titles I’ve been reading lately.

Alice in the Country of Diamonds: Bet on My Heart

I have never played any of the Alice in the Country of — games, nor have I read any of the various manga adaptations, so by all accounts I should have been completely lost reading the Diamonds light novel. Yet besides the initial confusion caused by the overload of characters, I followed the plot easily enough. It’s one of those fish out of the water stories, so I could very much relate to the heroine as she spent half the novel wondering wtf is going on.

I’m guessing that the appeal of the series lies in its refreshingly pragmatic protagonist. She reminded me of a slightly less snarky Haruhi from Ouran High School Host Club. She does make some bafflingly stupid decisions for plot-convenient reasons at times, but at least her thought process is sensible. For example, she mainly acts out of self-preservation for most of the story, which makes sense considering that she’s caught up in a mafia war. When she falls for the male protagonist, I could understand why she rationalised her feelings instead of acting upon them immediately. Her life was literally on the line, and she was never entirely sure whether she was experiencing a kind of Stockholm Syndrome or simply latching onto a familiar face in an unfamiliar world.

What impressed me the most about the story was the worldbuilding. The idea of travelling between worlds is not a new one, but Quin Rose (the game developer) makes things interesting by tweaking the personalities of the characters in each permutation of Wonderland. From what I understand, the differences between the Country of Hearts and the Country of Clovers are relatively minor, but in the Country of Diamonds, everyone is radically different. There’s a growing mystery about how the secrets of the world, but all of it is left unexplained even at the end of the novel. This was a not so subtle hint to play the games.

The descriptions themselves are rather sparse, even for light novel standards, and there’s a measure of authorial laziness in terms of how people are described. It is awfully convenient that anyone who is not a named character is “Faceless” and therefore barely described at all. I will give credit to the writer Sana Shirakawa for using comparisons very effectively, though. By showing the heroine comparing the various worlds she’s been in, Shirakawa manages to create a distinct image of the Country of Diamonds, a world that feels simultaneously sparse and yet full of danger.

I did not read the novel in Japanese, so I cannot comment on the translation accuracy, but I thought that William Flanagan did a good job producing a breezy and readable translation, so I’d recommend getting an English copy if you can. 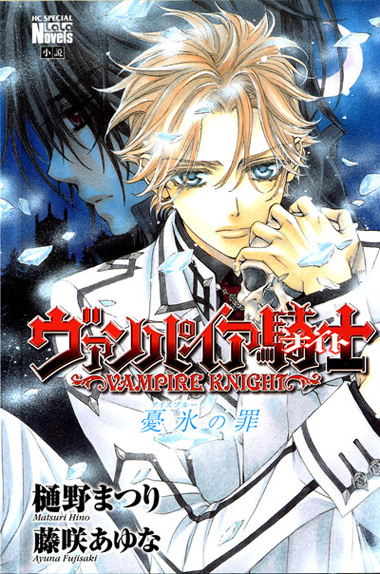 I have only vague memories of Vampire Knight. I remember thinking that Kaname came off as kind of a pedo and that Zero was the world’s biggest teenage edgelord, but that’s about it.

The light novel was good, though, mostly because it kept things simple and didn’t descend into the soap opera dramatics that the manga is infamous for. The LN is divided into two novellas, both of which are set before the main story begins, so there wasn’t much room for a complex story. Our heroine Yuki is only a minor character here. Most of the focus was on the cruelty of the Vampire Knight world.

I always knew that Zero had the short end of the stick, but his dilemma really comes into perspective through the novel’s first story, which centers around a young girl’s transformation into a blood-sucking monster. While the heroine of the novel eventually accepts her impending death with grace and dignity, Zero fights tooth and nail against his fate. I gained a much better appreciation of his struggle after seeing another person cope with the same dilemma. Suddenly, Zero’s angst didn’t feel so overblown.

I can’t for the life of me remember what happens to Zero in the end, but come to think of it, that “tragic childhood friend” premise was pretty good. It really took the whole “THE CHILDHOOD FRIEND NEVER WINS” trope to a whole new level.

The second story in the LN tells a story about Zero’s past. I didn’t like this one as much because it felt more rushed, and also the plot twist was waaaaaaaaay too convenient. It ended up going overboard on the whole “crapsack world” theme. I mean, the struggle to remain in touch with one’s own humanity in the face of a terminal illness is something that even non-vampires can relate to. But I doubt that many people can relate to the dilemma which Kaito faced in this LN in any shape or form.

Overall, I enjoyed the Vampire Knight novel because it reminded me that the series had some neat ideas going for it, and that these ideas are well suited to the short story/novella format. I should pick up the other Vampire Knight novel available in English some time – Fleeting Dreams or whatever it’s called.

Once again, I read the Ice Blue Sin novel in English. Unfortunately, it seems to be out of print. You can read a dirty fan translation of the first story here, though.

This is one of those series that I wish had an English translation because it’s refreshingly free of all the usual ecchi romcom tropes, even if it does stick to the high school setting. The friendship between Riko (the red-haired girl) and Sana (the black-haired boy) has to be one of the most genuine and inspiring I’ve seen in this sort of story. There’s no hint of romantic feelings from either of them, which makes it even more remarkable. I’m about two-thirds through the first volume, but I can’t wait to start the second volume because I hear it focuses on their friendship in even more detail.

As for the story itself, so far it feels very much like the introductory volume that it is. Henai Psychedelic lacks the danger and urgency of Gekkou, instead going for a more laid-back comedic sort of tone. Nevertheless, there are scenes that revolve around clever psychological tricks and subverting the reader’s interpretation of the characters, so I was never in any doubt that Mamiya wrote this. Expect a full review when I’m finished with the series.

Are there any light novels for girls (or written by girls) that you find interesting? Let me know in the comments!

Edit: I added some context to the statistics at the beginning of the post.