Everything You Need to Know about Qualidea Code

The Qualidea Code anime started airing today! …leaving audiences around the world very confused. Thus, I have prepared a handy FAQ to explain what the heck is going on and how this series was conceived.

A. Qualidea Code is an anime about a group of teenagers with superpowers who fight to protect their post-apocalyptic world from mysterious monsters referred to as Unknowns. You’ll have to watch the anime to find out what actually happens in the story.

Q. Is this an anime-original project?

A. Yes and no. The scenario for the anime is original, but it is based on the characters and “shared world” of the Qualidea light novels. So if you want to understand the setting and characters in greater depth, you should read the light novels, which contain a lot more exposition.

Q. What do you mean by a “shared world”?

A. The Qualidea novels are written by three popular light novel authors: Watari Wataru (Oregairu), Sagara Sou (Henneko) and Tachibana Koushi (Date a Live). They also worked together on the script for the anime. Their group name is Speakeasy, which is a nod to how the writers came up with the story in the first place. They got drunk and started coming up with story ideas in a speakeasy. (I’m not even joking about this.)

Anyway, to avoid double-ups and confusion, each author is in charge of writing their own characters and school. They are as follows:

In addition, each author is in charge of their own novel series. Each Qualidea series is standalone and can be enjoyed independently of the other Qualidea stories, but you’ll get a better understanding of the overall setting if you read all of them.

Here is a list of the Qualidea novels that have been announced so far:

Q. Are any of the light novels available in English?

A. None of them have been officially licensed in English. However, I did write a fan translation of Kuzu to Kinka no Qualidea, so you can check that out if it interests you. 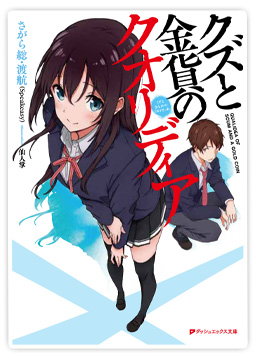 However, this light novel has nothing to do with the anime plot whatsoever. It is a prequel story set before the apocalypse. It does have some subtle references to the main story (notice the names of some of the characters and the ominous chapter openings), but otherwise it tells a standalone story about a completely different set of characters.

Q. What is the relation between the light novel and anime plot?

I was originally planning to translate the rest of the Qualidea titles but I no longer have the time or interest to do this. So I will just spoil what happens at the end of Kuzukin and explain how this ties into the main story.

Basically, it is strongly implied that the Unknowns attack Earth at the very end of Kuzukin. During the war against the Unknowns, the protagonists of the Qualidea Code series were put into a deep sleep for years. When they finally woke up, they mysteriously possessed supernatural powers, rendering them capable of fighting the Unknowns.

At this point, the relationship between the Kuzukin characters and their Qualidea Code counterparts is still unclear. Is Chigusa Yuu, the main heroine of Kuzukin, related to Asuha and Kasumi? Is Suzaku Reiji, the handsome student council president, related to Suzaku Ichiya? Subsequent Qualidea novels may clarify the answers.

So if you find yourself thinking: “who the hell are these characters?” you can keep watching the anime in the hope that all will eventually be explained, or you can read the light novels and get up to scratch.

Note that the Qualidea Code anime appears to focus on the interactions between the characters from the different schools. The light novels do not showcase any such interactions. Instead, the LNs focus specifically on the characters from one particular school. Think of the Qualidea Code anime as The Avengers, while all the light novels are the separate Marvel properties.

Note that Dou demo ii Sekai nante (the Watari novel) has not yet been published and is scheduled for release on the 20th of July.

Q. Who came up with the idea for Qualidea?

A. If the interviews with the authors are anything to go by, Watari and Sagara first came up with the idea of collaborating on a novel two or three years ago when they went on a trip to the hot springs. Qualidea essentially started off as a goofy writing experiment, the result of which was the unorthodox plot of Kuzu to Kinka no Qualidea.

Later on, Tachibana Koushi came on board to the story. He was the one who came up with the idea of setting the story in a post-apocalyptic world. You can probably attribute many of the more “chuuni” parts of the setting to him. Watari and Sagara edited the story of Kuzukin in order to retroactively fit the story into the Qualidea universe Tachibana envisioned, although the core of the story remained essentially unchanged.

We have less information about how the anime was greenlit and produced, but here’s the Qualidea Code Production Committee according to the anime credits:

The anime was first announced towards the end of 2015, when only Kuzukin and the first Itsuka Sekai wo Sukuu Tame ni book had been released. On the face of it, this seems to have been quite a premature decision, given the lack of source material. The anime seems to have been created with the intent of promoting the light novels as they are being released. At the same time, the anime showcases an original story from the authors to compensate for the lack of source material. 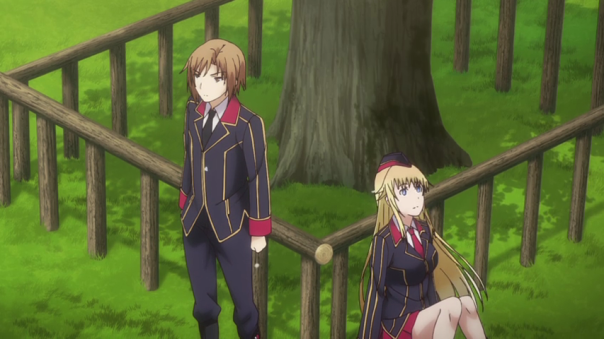 Q. Why does Oregairu volume 12 keep getting delayed?

Watari is juggling numerous projects at the moment, including but not limited to: Oregairu, his contribution to the Qualidea Code light novels, the original script for the anime, and his contributions to Girlish Number (another multimedia franchise which is rather vague and fuzzy about the details for the moment). With so much stuff on his plate, it’s no wonder Oregairu keeps getting pushed back.

I’m not sure if you can even expect the next Oregairu volume to be published this year, frankly. Oh well, at least Oregairu fans have the Qualidea series to tide them over for now… right?

A. So, uh, is Qualidea Code a good series?

Q. You decide! You can watch the series on Crunchyroll.

Personally, I was fairly entertained by the first episode of the anime, perhaps because I had a pretty good idea of who these characters were before I started, but I can easily understand why people would be lost. That’s why I wrote this guide.

However, I don’t want to give the impression that you have to read a bunch of light novels to understand the basic plot of the Qualidea Code anime. I was actually impressed by how much information about the setting and characters that the anime managed to convey without relying on exposition dumps. Still, you’ll probably get more out of the anime if you familiarise yourself with the basics of the franchise.

(The Iwasaki Taku soundtrack rocks, by the way.)