Hey guys, I’m back with another review of an untranslated light novel that nobody has read or will ever read. But I liked it, so here’s a blog post about it. I will be spoiling the crap out of the entire novel, so here’s a fair warning in advance. I have a lot of ~FEELINGS~ to convey, so let’s jump right into it.

First Off, Some Background

First published in 2003, 12-gatsu no Veronica is the debut work of Junichiro Takane. This oneshot novel was the winner of the 14th Fantasia Taisho Grand Prize, but the only reason I picked it up was because I heard Kastel say nice things about it. That, and apparently the story was about knights doing chivalrous crap. I’m a sucker for that stuff.

The basic premise goes like this: In this archetypal medieval fantasy-land, a dude exchanges a promise with his childhood friend to be her knight when she gets chosen to be the vessel for the goddess Fauzelle. When the goddess’s vessel – known as Veronica – is anointed, she falls into a deep sleep. She will only wake up in her old age at the very last moment of her life in order to pass on her role to the next Veronica. Before she falls asleep, Veronica picks one man out of a small group of thirteen knights in order to be her personal knight. He will gain semi-immortality and watch over her as she sleeps, only passing on when Veronica herself dies.

This premise is absolutely dripping with pathos, and I thought it would be chock full of sad scenes about the MC and his childhood friend, whose love can never be (;____;)

But actually it spent way more time developing the MC’s relationship with his fellow knight named Ryan. And while the MC never said “I love you” to his childhood friend or even thinks it in the narration, he says Ryan ga suki da at least five times that I remember. JUST MAKE OUT WITH THE DUDE ALREADY CHRIST

Alas, the bromance ends tragically too. The MC doesn’t even get to see his childhood friend in her last moments. He gets fucked over in every conceivable way because the goddess I’m pretty sure is an enormous asshole.

The Structure of the Novel is Really Clever

The way it comes together is really quite beautiful. A big theme of the novel is “history repeats itself”, and there’s this moment halfway when everything clicks and I was like: oh daaaaamn.

The story begins in media res. The knight Freyle is fighting a desperate battle in the rain to protect the future Veronica from being abducted by soldiers from the enemy country. His comrades around him are all dropping like logs, and just when Freyle thinks that he too is a goner, a mysterious one-armed man named Hacqurie saves the day. Hacqurie is a wanderer with a sardonic attitude who claims to have been “just passing through” at this oh-so-convenient moment. Freyle is understandably suspicious of Hacqurie’s motives even though the man saved his life. 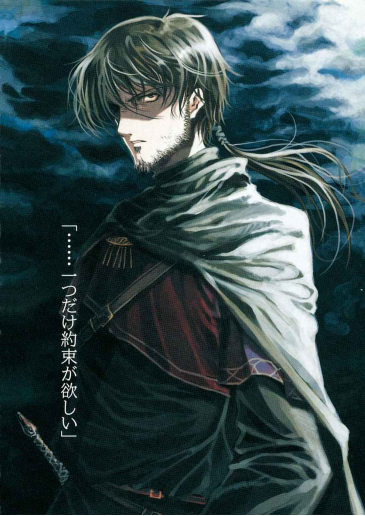 At the same time, the battle has left the remaining knights in the group thoroughly incapacitated. Of the original thirteen knights, only four remain. Also, the commander is heavily wounded. Therefore, Freyle and the others have no choice but to trust Hacqurie. They nurse their injuries in a nearby village and try to think of a way to deliver Veronica to the ceremony in Lugnass before the start of December, when Veronica will fall into her deep sleep. But things get even more complicated when it turns out that one of the knights is a traitor…

From there, the narrative flits between past and present. Every second chapter recounts a part of the MC’s backstory. Why did he choose to become Veronica’s knight? What sort of sacrifices did he have to go through in order to see her again?

Because the story is told consistently through first-person perspective, I only realised about halfway through the story that the backstory chapters weren’t told through Freyle’s point of view but through Hacqurie’s. Hacqurie is the previous Veronica’s knight, and he was travelling to Lugnass in order to see her one last time before they both died. Freyle’s character serves to frame this backstory in historical perspective, because it turns out that the tragedies of the past are repeating themselves. But ultimately, it’s Hacqurie’s story that finds closure by the end.

So why isn’t at Hacqurie at his childhood friend Sheazelle’s side, performing his duty as a knight?

Because his “”friend”” Ryan was a complete and utter dick.

He’s set up as this noble knight and a hero, but he gets enraged with jealousy after he finds out that Hacqurie is Sheazelle’s childhood friend. This guy hasn’t watched enough anime. Doesn’t he know that the childhood friend never wins???

Ryan is so salty that he decides to kill off his own pals and sell Sheazelle off to the enemy country. Hacqurie saw the warning signs, but because he wanted to believe in Ryan he did nothing. But after he walks in on Ryan killing their comrade, Hacqurie has no choice but to kill Ryan. Hacqurie gets caught killing Ryan, and so he’s assumed to be the traitor.

But instead of telling the truth about what happened, Hacqurie decided to defend his friend’s honour and pretend that Ryan was a hero all along. And while he’s stuck in prison getting tortured, he rationalises his choice by telling himself that Ryan means more to him than Sheazelle does.

Ryan was a complete dickhead traitor, while SHEAZELLE DID NOTHING WRONG. This choice should be easy!!! WHAT THE FUCK IS WRONG WITH YOU, HACQURIE???

To be fair, the novel does point out that while Sheazelle is Hacqurie’s childhood friend, he never saw her for ten years after she was chosen to become the next Veronica, whereas Ryan was constantly at his side. And even when Hacqurie was close to Sheazelle as a child, he constantly teased her and made her cry. Objectively speaking, Hacqurie’s dynamic with Ryan was healthier and based on mutual respect… well at least until Ryan turns into a GODDAMN FREAKIN’ TRAITOR

I mean, I get it. A knight’s vow of friendship is a big deal. But I could not relate to Hacqurie’s reasons for sticking up for his friend. Hacqurie, you did nothing wrong. Your friend was an asshole. You should just admit the truth, especially that Ryan is already dead and doesn’t care anymore anyway.

It frustrated me but… well, it was all very sad, because Hacqurie was always acting with the best intent. In some ways, he was selfish and single-minded, but in other ways, he was so utterly selfless. I definitely could not have made the decision he made.

In the end, Sheazelle still picks Hacqurie as her knight, even though he wasn’t there for her when she fell into her deep sleep. Which is all the more tragic in a way, really. You’re never told what she was thinking, but I can only imagine that she fell asleep hoping against hope that Hacqurie would fulfill his promise to her one day. But instead of staying by her side as her knight, Hacqurie’s name was completely tarnished. Unable to become a knight and unable to die either, he became a wanderer, living for that one moment he could see Sheazelle again.

And the saddest thing? He never does see Sheazelle again. At the very end of the story, he sacrifices his chance to meet her for the sake of protecting Freyle and his childhood friend. And Freyle only figures this out when it’s too late, because he’s as single-minded as Hacqurie used to be.

But Hacqurie still feels fulfilled anyway, because he knows that he did the right thing. 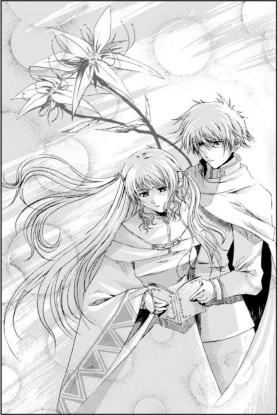 So yeah, in the end, 12-gatsu no Veronica ended up displaying all the things I like about stories involving knights and chivalry and that sort of thing. It’s told like a romantic fairytale, but underneath the surface the narrative grapples with themes like altruism and selfishness and how to do good. What does it mean to protect someone else with your own life?

And finally, I appreciated that the story focused on the chivalry ideal broadly, rather than just focusing on protecting the lady. The emotional core of the story really revolved around Hacqurie’s efforts to protect Ryan and Freyle. It was not what I expected, but I appreciate it the more I think about it.

I bought this light novel thinking it was a cute knight/princess story but it was a gay romance instead. I recommend it.