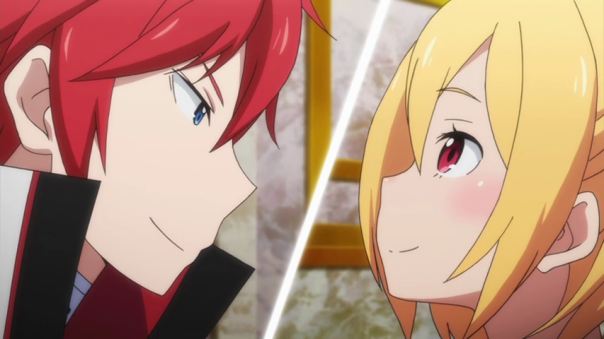 Re:ZERO was a series I became mildly obsessed with as it aired. It resonated with me for similar reasons Oregairu did – because it showed a deep understanding of its self-loathing geek protagonist. In the end, I couldn’t help but root for Subaru, even when I knew that his actions were self-defeating. He felt empty and alone, and he was convinced that he could save himself by becoming Emilia’s knight. I’m not sure that he overcame his white knight complex by the end of the anime, but he did become more capable of empathising with others, and that was significant in itself.

However, anyone who followed me on twitter during the time Re:ZERO aired probably knows which two characters really stole my heart.

Reinhard and Felt are just side characters in the Re:ZERO anime. While they did play a crucial role in the first three episodes, they pretty much vanished from the story altogether after that point. So why did I end up liking them so much?

Because in any other fantasy story, they would be the main characters.

Felt is an orphan, who manages to survive on the streets by becoming a thief. But through a twist of fate, the Dragon (basically the deity of the Re:ZERO universe) identifies her as one of the possible candidates for the throne. On top of that, she strongly resembles the Lugunica royal family with her distinctive blonde hair and red eyes. Given that the royal family died because of a mysterious illness, what can explain Felt’s existence?

Meanwhile, Reinhard van Astrea is indisputably the most powerful character in the Re:ZERO universe. His past is shrouded in mystery, and he appears to have a complicated family situation. When he discovers that Felt is a candidate for the throne, he immediately decides to become her knight, whether she likes it or not. For all his inexplicable actions, he comes across as an extremely nice guy who is fighting on the side of “good”.

Any other fantasy story would revolve around Felt’s backstory and her connection to the throne, but instead her goal of revolution is presented as a side show. Even when Felt and Reinhard’s story becomes a bigger focus in the overall plot of Re:ZERO, these developments will most likely be framed through Subaru’s point of view.

Had the story been told through Felt and Reinhard’s perspective, I would have thought of them as archetypal characters, but here they’re refreshing. It just goes to show that even “the main characters” of one story are just part of a bigger world. Given that even Subaru, the story’s point-of-view character, has to learn the hard way that the world doesn’t revolve around him, the narrative’s treatment of Felt and Reinhard makes particular sense.

In other words, everyone is a main character in Re:ZERO when you look at things through their perspective.

That’s why I spent a lot of time thinking about Felt and Reinhard and that funny dynamic they share. I think their interactions are really cute. Felt is an independent-minded girl and hates the nobility, but she doesn’t mind relying on Reinhard to achieve what she wants, even though he technically kidnapped her. Reinhard is so charming and well-loved that even Felt can’t bring herself to dislike him, although she does get huffy and try to kick him around in a tsundere-ish fashion.

It’s pretty clear that for all of Felt’s grumblings, she and Reinhard are actually buddies in the Re:Petite short episode 5. Just look at this dialogue, man: 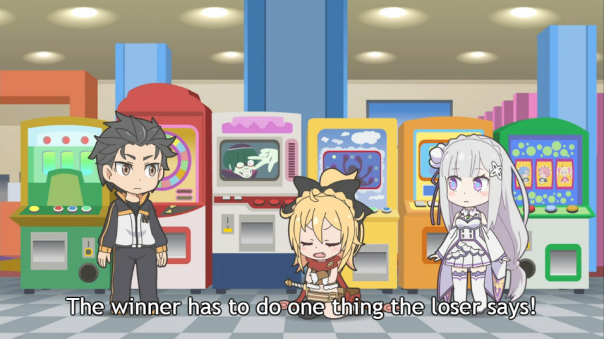 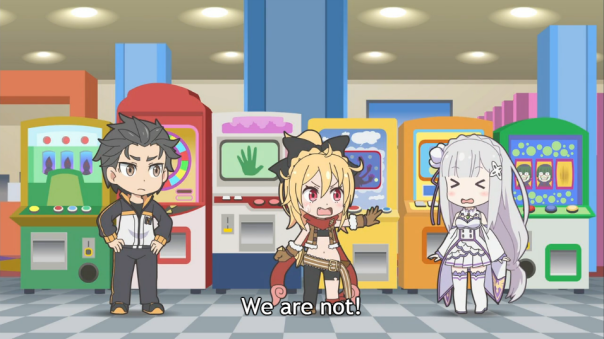 In the web novel, it’s shown that Reinhard is really good at making sweets, so maybe that’s the reason why Felt sticks with him…

I also think it’s adorable how Reinhard lectures Felt about how to be a lady and even picks out her dresses for her. Apparently, he even has the ability to pick out the best dresses. He’s the most powerful guy in the world, but as a knight he serves Felt in the most mundane of ways. The gap moe is strong with these two.

Did you know I was so obsessed with Felt and Reinhard that I even drew fanart and wrote fanfiction about them? Please tell me I’m not the only one who loved these two characters to bits.

Posted on December 18, 2016, in Pairings and Shipping and tagged 12 days of anime, i watch rezero mainly for reinhard and felt, re zero, reinhard is such a hunk, reinhard x felt, yahari ore no seishun love come wa machigatteiru. Bookmark the permalink. 18 Comments.