← February 2017 Update: I’ve Turned Into a Riajuu
What We Learn Through Body-swapping: The Subtext of Torikaebaya and Your Name →

I’ve never understood the hipster mentality. While it’s true that not all popular things are good, I don’t see the point of getting mad about the duds or attacking the fans for being mindless sheeple or whatever. Take Sword Art Online, for instance. This series has a laundry list of flaws but the Youtube reviews in particular blow them way out of proportion. What is it about SAO that inspires so much ire? I have no idea, since its narrative flaws exist in just about every mediocre anime ever. Even if I disliked the series, it’s just not worth the energy to rant about.

The above paragraph is fairly moot since I actually like SAO, and I wrote multiple articles this month apologising for it. On Anime News Network, I wrote a piece on Reki Kawahara’s career, arguing that he’s improved as an author over the years and that SAO is mostly the product of his amateur web novel author days. On Crunchyroll, I praised SAO‘s visuals and pointed out that the anime is a good adaptation of the novels, all things said and done.

All this SAO talk was in anticipation of the Ordinal Scale movie. I was particularly looking forward to it because I got the opportunity to write interview questions for the creators, and I knew beforehand just how much love and hard work had been poured into it. The film was a pure fanservice from start to finish, but let’s not interpret that in a negative light. I think iblessall put it best in his review of the movie:

…it was delightful to see Ordinal Scale speaking a language only those who care about this franchise—warts and all—can understand. In the moment when we see Starburst Stream unleashed once again or Yuuki’s spirit embracing Asuna as the Mother’s Rosario Sword Skill appears in a burst of purple lights, the film clearly, unavoidably asks but one thing of its audience: “Remember. Because if you remember how you felt when you watched Sword Art Online, this is for you.”

I’m sure that this film has its fair share of detractors, but Ordinal Scale was unquestioningly Sword Art Online at its best (to me, at least). Can we finally agree that SAO has its legitimate good points?

Speaking of popular anime that attracts far more more hate from self-proclaimed critics than it deserves, Naruto ended its epic anime run this month. The ending of the anime was a fairly protracted affair, nor were the contents a surprise given that the manga ended over two years ago. But it still feels like the end of an era. This month, I looked back on Naruto and remembered it fondly as my gateway anime. This ended up being a weirdly popular article, especially given that I barely talked about the plot of Naruto itself. This has less to do with me being a hater and more to do with me having not watched Naruto in years. Nevertheless, it’s still very possible to have a conversation about Naruto and what it means as a cultural icon and gateway anime.

After reading this post thus far, you may feel reassured to know that here at Frogkun.com, I don’t just exploit popular anime I don’t care about for clicks. I might have watched the most popular Winter 2017 show in Japan, but since nobody in the West bothered to glance at it, it’s a crummy show to write clickbait articles about in English. That’s right, I’m talking about Kemono Friends. I first took an interest in the series after reading Kastel’s piece on how the show became big on Japanese social media, because Kemono Friends sounded like the very definition of a Fantastic Meme. Some of the reactions mentioned in the blog post fascinated me so much that I ended up translating a thinkpiece written by a Japanese sci-fi author about why Kemono Friends is good sci-fi. 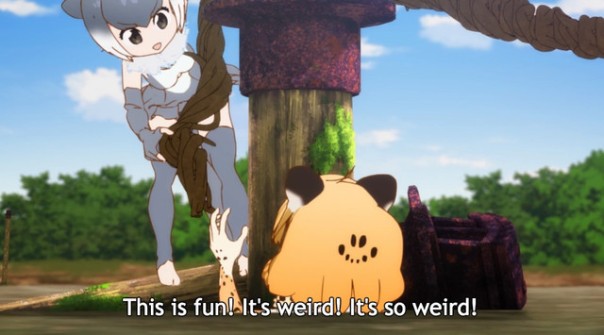 Unfortunately, I got on board with the series a bit too late to participate in all the memes and speculations, but it was very tanoshii until the second-last episode, which was very tanoshikunai.

And before you think I’m the kind of person who only likes things that are popular in America or Japan, the actual best anime this season in my humble opinion was Akiba’s Trip. I know I hated on it before, but it grew on me a lot. The anime is worth watching for the Yu-Gi-Oh! parody episode alone (episode 9), but in general the series is a great exploration of otaku culture in Akihabara that doesn’t simply retread the usual topics. And despite exploring niche subjects every week, the show also goes some lengths towards challenging the hipster mentality too. As Dee puts it in her article about nerd culture in Akiba’s Trip:

Our antagonist is literally a militant nerd gatekeeper, and Akiba’s Trip sees him for what he is: A jerk, both nuisance and threat to other fans and the culture as a whole. In a moment of true heroics, our flawed protagonist unhesitatingly shuts him down, reminding him that “You have to treat newcomers well. That’s the only way any content can survive.” He also points out that “everyone started off as a casual user,” which the Militant Gatekeeper frantically tries to pretend isn’t true but obviously is.

tldr; I don’t understand the hate on popular things. And this is coming from the perspective of someone who likes things that are not very popular. It’s not as if the existence of a popular thing will take recognition away from other things. Even when they’re not well-written, popular works can spark interesting conversations, but “this thing is overrated” is just a boring opinion to me…

What do you think?

← February 2017 Update: I’ve Turned Into a Riajuu
What We Learn Through Body-swapping: The Subtext of Torikaebaya and Your Name →