Revisiting Re:ZERO: Some Observations in Retrospect 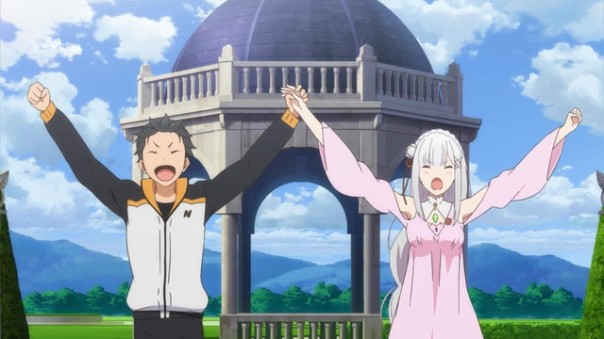 Re:ZERO was one of my favourite anime series of 2016. I remember being kind of skeptical about the series at first since it seemed like your cookie cutter isekai anime, but I ended up loving it by the end. It had some interesting things to say about the hero’s masculinity, and plus it had some of the most memorable side characters I’ve seen in this subgenre.

Now that the Memory Snow OVA is finally just around the corner, I found myself revisiting Re:ZERO and falling in love with it all over again. I read the first two volumes of the short story collection (短編集), which focus on the slice of life antics of Subaru and co. that occur between episodes 11 and 12, and was surprised at how much I liked it. I thought that most of my fondness for this series comes from the side characters, worldbuilding and the harrowing adventures, but somewhere along the line, Subaru and his friends have grown on me. At least, I wasn’t bored reading two volumes worth of stories about them where nothing much happens.

I’m not going to bother summarising what happens in the stories themselves, as those details don’t matter much to me. Some other dedicated fans have probably already summarised all the books anyway. What I am going to do is list some things I thought about as I was revisiting this series for the first time in two years. Spoilers for the anime to follow.

Subaru was never supposed to be a loathsome character

Back when Re:ZERO first aired, I remember a bunch of people talking about how Subaru represented The Entitled Male Otaku. Those people praised the anime when Emilia rejected Subaru and when he suffered in the most gruesome ways for trying to be a hotshot hero.

For a while there, it seemed like the show was trying to make an example of Subaru and everyone who thinks like him. I guess it was kind of cathartic to see Subaru get kicked to the curb when that kind of character would normally have girls swooning over him left, right and centre for no good reason at all.

Even at the time, however, I thought it was too simplistic to see Subaru as that kind of loathsome figure. He’s a deeply flawed human being, but he’s also an earnest kid, and it’s that earnestness which marks him as “a good person” in my mind. He doesn’t deserve a harem (no one does), and he sure as hell didn’t deserve the suffering that was heaped on him just because dudes similar to him got harems in a different show.

In other words: Subaru Did Nothing Wrong.

There’s a short story where a minstrel named Liliana predicts that Subaru will become a great hero. Notably, she said that not because he made any grand gestures of saving her, but because he empathised with her when she made a decision that seemed selfish. Even before Rem gives Subaru that famous pep talk in episode 18, I think we’re supposed to see Subaru as a person who has the potential to become a hero. And it’s not power that defines the hero, but the ability to inspire others.

Rem is cute. So is Emilia.

The short stories really emphasise the “cute” aspects of the heroines. This is especially the case for Emilia, whose clumsy traits are accentuated more than usual. It’s revealed over the course of these stories that Emilia is tone deaf, cannot hold her liquor, is easily frightened by ghosts, and doesn’t know her way around a kitchen at all.

To think that this clumsy girl is the one who constantly treats Subaru like a child. The “gap” is hilarious.

Rem, meanwhile, hero worships Subaru to an extent that is also hilarious. Subaru points out that the sky is blue? “Wow, Subaru-kun! You’re so astute!” But the best parts are when she says things that could be interpreted meanly in an incredibly earnest way. (“You’re so cute when you fall into the palm of my hand, Subaru-kun!” “Th-That’s not a compliment!”)

In the main series, I found Rem’s devotion to Subaru touching but thought her character overall was kind of flat. It’s those little moments of ribbing where you don’t quite know if Rem is being straight-faced or not that add more charm to her dynamic with Subaru.

The worldbuilding is still the best part of the story

The worldbuilding in Re:ZERO is some of the best I’ve seen among fantasy literature (not even just isekai). There are few exposition dumps, and any exposition that does happen occurs naturally within the flow of the story. There are many, many aspects of the world that are mysterious, but you gradually come to piece things together.

This strength of Re:ZERO still remains in the short stories. You find out little snippets about the physiology of powerful spirits like Puck. Because he has too much power contained in his body, there are times when he basically bleeds magic. Subaru compares it to being on heat because the kanji is so similar (発情期 vs 発魔期). Colorful little details like this spice up the story, even in the slice of life episodes.

This remains my favourite part:

Subaru: Instead of having two heads at the front, it’s got a head at the front and back. How does it take a shit?

Puck: Demon beasts turn food into mana, so they don’t ever poop.

Overall, I really enjoyed revisiting Re:ZERO this past week. Now to hope that the OVA is good and that they’ll eventually give us a continuation of the main story! One can only hope.

What are your thoughts and memories of Re:ZERO? Feel free to share in the comments!

Posted on October 5, 2018, in Anime Analysis and tagged re zero. Bookmark the permalink. 11 Comments.