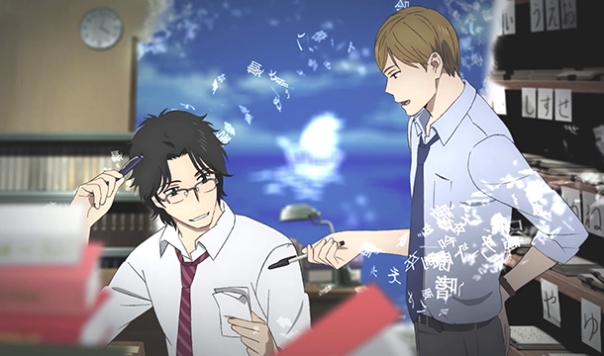 The Great Passage (or Fune wo Amu) is a novel by Shion Miura. It’s getting an anime next season, featuring character designs by the Rakugo Shinjuu artist and a spot in the Noitamina TV block. I suppose most anime viewers should have it pegged as a mature and down-to-earth drama, especially after seeing the trailers. This was my impression of the anime as well.

As it turns out, the anime’s style is only one interpretation of the novel’s story, and the live action film directed by Yuya Ishii appears to be quite a different beast, judging by its trailer. It depicts the story as a quirky romcom, complete with a socially inept male protagonist, before taking a melodramatic turn. The light-hearted approach to weighty topics is reminiscent of the “trendy dramas” of the 1980s and 1990s. (It’s worth noting that the novel, despite being published in 2011, is set in the 1990s.)

I haven’t read the original novel, so I can’t tell you how faithful either adaptation is to the story. Nor have I watched the anime or film themselves. I only have access to the trailers, so I can only comment on how these adaptations have been pitched to their audiences. The two trailers strike a completely different tone and feel, to the extent that I initially found it hard to believe that they were adaptations of the same story. This says something interesting about the leanings of their directors, as well as the perceived target audiences of the live-action film and television anime in Japan.

The live-action film was first released in 2013 to a general audience. It won several awards, including the Japan Academy Prize, and grossed about $7 million. The director Yuya Ishii is known for his wacky comedies, Sawako Decides (2009) and Mitsuko Delivers (2011), and you can see some of his comic sensibilities in the trailer below:

It’s a pretty typical movie trailer when all is said and done. It sets up Majime’s character as an overly serious type, introduces his love interest Kaguya, and establishes Majime’s work on the dictionary as the driving force of the drama. To be honest, the parts making fun of Majime as a “weirdo” and a “virgin” are pretty eye-rolling, but spelling it all out on the screen does help establish a quirky romcom vibe.

The anime trailer, on the other hand, has a much more serious and measured tone. The subdued, down-to-earth aesthetic is fitting for Toshimasa Kuroyanagi, given that he also directed the Say “I Love You” anime.

There are three anime trailers out so far, all fairly similar in tone and style, but let’s focus our attention on the second one in particular:

A couple of things are worth noting here:

The differences lie in the visual framing of the characters. The anime trailer opens with a somber monologue: “Unable to cross the seas, we simply lie there, unable to stand.” The first time we see Majime, we only see his downcast shoulders from behind. The train zooms past him, leaving him at a standstill. His lack of movement while the world passes him by symbolises his lack of agency at the beginning of the story.

By contrast, the film trailer opens with a humorous skit; the first time we see Majime, his hand twitches to indicate his social awkwardness. This scene plays out in silence, but as soon as it finishes, the soundtrack comes in with whistles and staccato notes played on a piano. It’s a clear signal to the viewer: “This is a light-hearted film.”

Also notice how the anime tends to show closeups of the characters’ mouths, as if to give greater weight to the words they are saying. This is fitting of a story that is explicitly about words and how they connect people. This visual idea isn’t present in the film, but you do see books in almost every frame, which establishes the theme about words.

The effect it has on the viewer is quite different, however. The books in the film are used to depict an external setting. The closeups and monologues in the anime, on the other hand, serve to invite the viewers into the characters’ heads and to draw attention to the voice acting in particular. In that sense, Kuroyanagi’s directorial approach is rather similar to Tomohiko Ito’s approach to Boku Dake ga Inai Machi.

From a commercial perspective, it makes a lot of sense for the anime to showcase the voice acting. The main characters are voiced by veteran voice actors: Majime is voiced by Takahiro Sakurai, Nishioka is voiced by Hiroshi Kamiya, and Kaguya is voiced by Maaya Sakamoto. If the anime is appealing to female fans of male voice actors (which I strongly suspect), it’s no surprise that Nishioka is a more prominent character in the anime. It seems that the relationship between Majime and Nishioka has much more emphasis in particular. 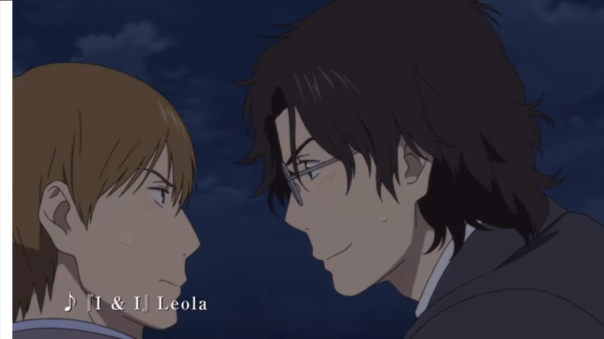 Ahh, bromance. On that note, I’d like to point out that the comments from the Japanese and English-speaking fans on the trailer video were very, very different. Almost all the English speakers made gay jokes while the Japanese speakers talked about the voice cast. Could it be that English fans are the “rotten” ones?? (笑)

An example of cross-cultural (mis)communication

In sum, I think that a major selling point of The Great Passage anime is Sakurai and Kamiya’s presence. Given that they are both getting older now, it’s nice to hear them playing adult roles instead of trying to sound like teenagers. The voice acting sounds very smooth and natural; I am sure that this anime will have its fans. It reminds me of Joker Game, another novel-turned-anime with a star-studded voice cast. A lot of anime fans didn’t seem to like Joker Game, but it seems to have been quite enjoyable for voice actor fans.

Whether The Great Passage will have a wider appeal is up in the air at the moment. The anime does, at least, seem more appealing to me than the film version does. The anime trailers also seem to have some interesting visual ideas, but everyone knows that trailers can be misleading when it comes to the actual quality of the product. So we’ll just have to wait and see. Fingers crossed!