← Comparing the Film and Anime Trailers for The Great Passage / Fune wo Amu
What’s It Like To Be A Voice Actor? →

I still don’t know what happened there…

For those who haven’t heard of it, Utsuro no Hako to Zero no Maria (or Hakomari  for short) is the most well-regarded light novel in the English-speaking anime fandom… at least if you listen to MyAnimeList. It’s currently rated the #2 manga/light novel of all time, beaten only by the Berserk manga. That’s some pretty high praise for a novel that has never received an anime adaptation, or even an official translation.

I’m really happy that Hakomari became such a hit with the English fandom. The light novel fan translation scene is chock-a-block with machine translations and half-finished work, and most of the stories that get picked for translation are narou shit anyway. (Gotta be blunt.) Hakomari is different, so it stands out.

Unfortunately, I can’t say that I actually like Hakomari myself.

The dialogue in this series is utterly inane. I don’t know how any of the characters can actually understand each other, as I usually need to re-read their conversations several times before I can piece together what they are even trying to say. Part of that could be the fault of the translation, which is particularly rough in the early volumes, but I’m pretty sure that the characters would sound utterly chuunibyou in Japanese too.

It reminded me of my experience reading Pandora Hearts, where everyone stands around making dramatic-sounding statements and pointed commentary about how nobody is acting like a normal human being. The Hakomari characters are self-aware about how abnormal they are, but that doesn’t make me connect with them any better. And it doesn’t make the psychological drama very effective either; all the psychology is explained in excruciating detail in the narration because none of it can be inferred through the character interactions themselves. Hakomari is definitely more on the “tell” side than the “show” side when it comes to its storytelling. 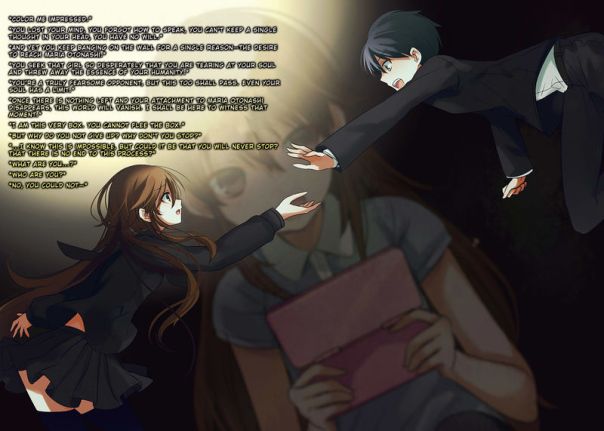 An example of the terrible dialogue I’m talking about. WARNING: Spoilers.

To its credit, Hakomari does have a neat premise that combines all sorts of plot devices from popular stories: time loops (All You Need is Kill), death games (Battle Royale), backfiring wishes (Madoka), the list goes on. But because the rules of the universe remain vague throughout the entire story, it’s hard to follow the action. The mind games in particular tend to fall flat because the reader is rarely given any clear logic around how the battles are fought, other than abstract concepts like “you lose when you give up the box.”

If that wasn’t bad enough, volume 2 is almost completely irrelevant in the larger plot, save for the cliffhanger at the end. The main characters involved are simply put on a figurative bus and disappear from the plot altogether, never to be mentioned again. Volume 2 was terrible, and it almost made me quit the series altogether.

Fortunately, things pick up in volumes 3 and 4, which were easily the most effective in the entire series. The “Kingdom Royale” game had clearly established rules from the outset, setting up interesting scenarios that made the most of the characters’ traits. Mikage is a more entertaining writer when he’s merely tweaking the rules of the book instead of going off the rails altogether.

The last volume is… well, let’s not even go there. I couldn’t stop laughing when it tries to establish how twisted the MC has become by (SPOILERS) making him literally kill a dog. And it only gets crazier from there. I don’t know how anyone could ship the two MCs together by the end, but I suppose the sheer level of wtf-ery is a point in their favour. Their relationship transcends creepiness and becomes… well… let’s just say they definitely deserved each other. (END SPOILERS)

Regardless of my feelings about the MC, he does look good in a maid outfit

I get the feeling that the author Eiji Mikage wrote himself into a hole by coming up with such convoluted plot twists, which might explain why the release dates between volumes were few and far between. He clearly put a lot of thought into the underlying ideas and themes behind the series, but the execution wasn’t quite there.

In the end, I can’t say I dislike this light novel, though. At the very least, I was entertained throughout it all. And as I said at the beginning of the post, I’m glad that it became popular. It just wasn’t my favourite light novel, and those MAL reviewers who call it “one of the best works of Japanese literature” ought to calm down and read more Japanese literature.

Looking back, maybe I would have enjoyed Hakomari more if I had read it in Japanese, but I think I have a better idea of what English readers would like to see in their light novels after reading the fan translation. I can see where they’re coming from. I, too, would like to see more plot-driven light novels available in English. There are many gems that will never see the light of day in English, usually because they don’t have an anime adaptation, so it can only be a good thing when a relatively obscure light novel like this one gets exposure. If you haven’t read Hakomari yet, go read it and form your own impressions!

(As a side note, Hakomari is vastly more well-known among English light novel readers than it is among Japanese readers. It just goes to show that a fan translation can still have the power to shape a fandom’s tastes, even in this day and age.)

← Comparing the Film and Anime Trailers for The Great Passage / Fune wo Amu
What’s It Like To Be A Voice Actor? →